It seems like a lifetime since I was in the thick of a legal battle to stop Victoria’s abortion exclusion zones, a struggle which went all the way to the High Court in Canberra. Designed to stop women reconsidering an abortion at the last moment, the exclusion-zones, also known as “bubble-zones”, or in legal parlance, as “Safe Access” zones, prohibit anyone from communicating about abortion within 150 metres of an abortion business, if that communication could lead to a woman choosing life for her child. 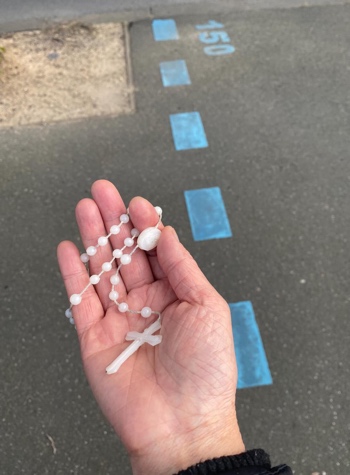 So it was with a mixture of sadness and resolve that I embarked on leading my first 40 Days for Life campaign, knowing full well that the consolation of seeing a baby saved from abortion was unlikely to be ours. I was very grateful to have support from Paul Hanrahan, who along with running Family Life International, has also organised many 40 Days for Life campaigns in Sydney. Paul’s advice was invaluable and his experience ensured that our expectations were realistic from the start. Paul travelled to Melbourne to speak at a pre-campaign event and was well-received by the attendees, especially by those who didn’t know what to expect from being involved in 40 Days for Life.

We launched on September 28th, although preparations had begun months before that. From the beginning, I knew that if this was to succeed, then God would have to take the reins and lead it. A project like this was simply too much for a busy mother like me to manage. So lead it, He did: and for the best part of four months, God sent everything needed for a successful pro-life campaign: an increase in the theological virtues of faith, hope and charity; generous financial assistance; physical energy and of course, He provided very dedicated personnel to assist.

One of these was Josephine Okon, a mother of three, whose main role – among others –  was to coordinate events. When asked why she agreed to take on such an arduous task, Josephine said,

“I used to go to the pro-life Marches with my Dad back in the 90s, but the first one I went to more recently was with my baby in 2019 where I was prominent in a channel 9 ad. 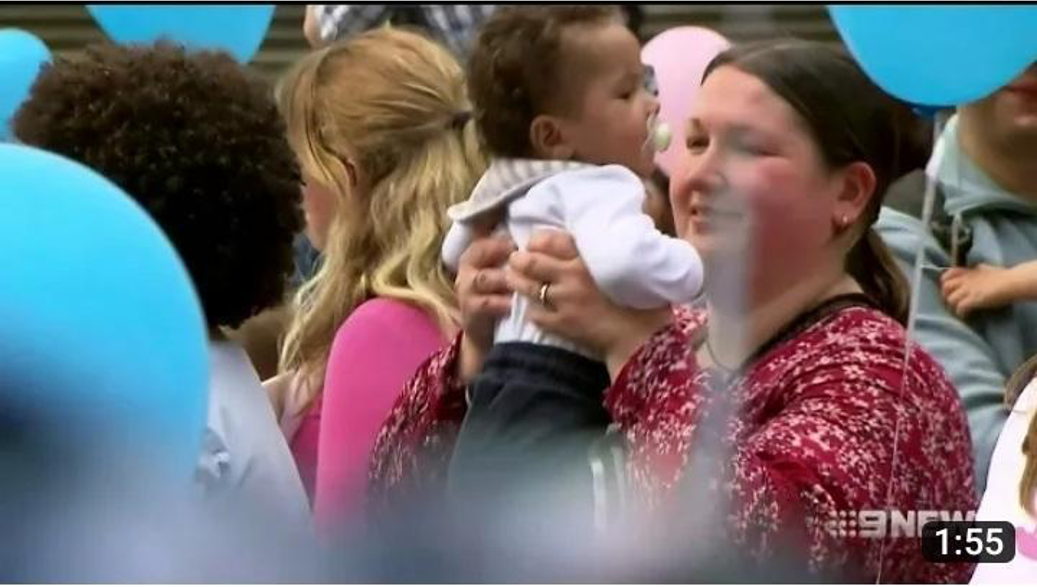 “I had found out about the 40DFL campaign through my friendship with Kathy when she would just casually mention she was doing it about 3-4yrs ago. I had intended to go out and pray with her but was afraid to for many different reasons. I had previously prayed out the front of the abortuary with the Helpers (of God’s Precious Infants)  for many years before I was married and had children, so the concept wasn’t foreign to me, but the thought of doing it on my own back then terrified me.

“I feel like God had been calling me to do pro-life work for a long time when the topic around 40 Days For Life came up again in my conversation with Kathy. I was determined to do more than just pray. I said to Kathy that if she does it, I will be alongside her helping her with whatever she needs to be done.”

Communications Director of the Melbourne campaign, Evelyn Ogilby, was also new to pro-life work. She said,

“With the COVID interruption, normal parish volunteer roles had slowed and dried up.  I was looking to do something but I wasn’t sure what so decided to wait patiently and see what God might bring me. I didn’t have to wait long when Kathy approached me to work on the 40 Days for Life campaign.

“I’m a strong believer in the sanctity of life from the womb to the tomb, so this prayer vigil seemed like a great opportunity to put my faith into practice.”

This campaign was the first one held in Melbourne for several years. Disruptions due to COVID-19 had made it impossible, but there had previously been ten campaigns conducted over 5 years.

This year, there were more than ninety in-person participants from more than twenty-five Catholic parishes and Christian churches, with hundreds more praying and fasting from home. We were overwhelmed by the support shown by our priests, particularly from the more traditional parishes. One priest asked his entire congregation to pray and fast for our intentions! In all, fourteen priests from around Australia and even overseas offered a total of forty Masses during the campaign for our protection and for an increase in holiness for our participants. 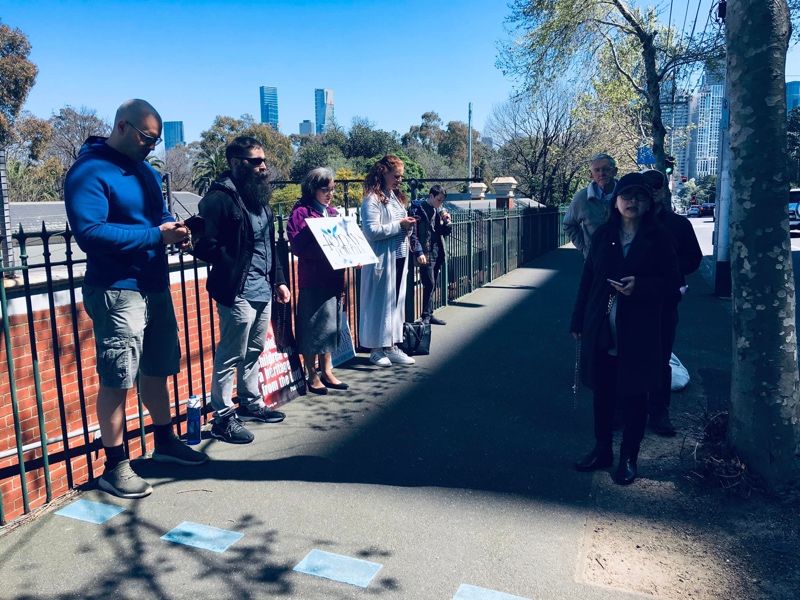 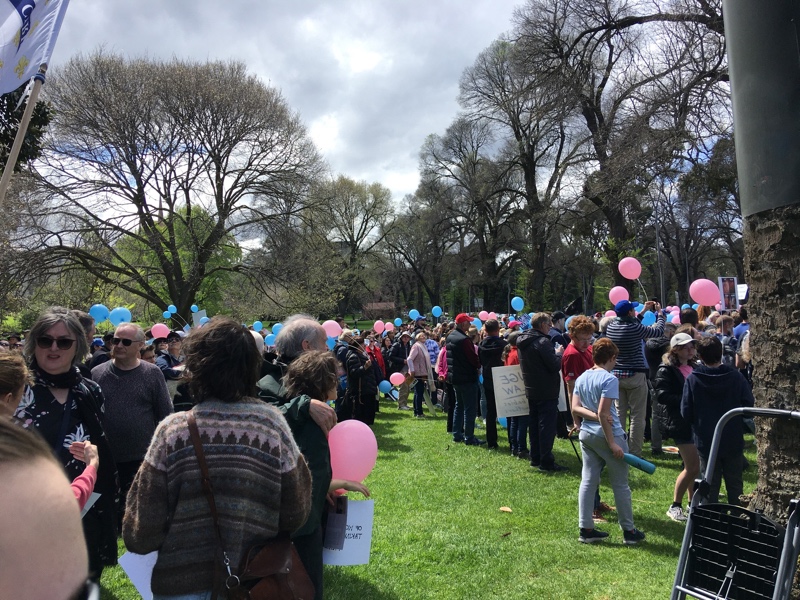 On Day 1, we held a launch event which featured talks by two post-abortive speakers: a post-abortive mother from Idaho, USA, named Kay Painter and also a Catholic doctor, Mark Hobart. Their stories highlighted the great damage done by abortion to those who procure them as well as the lasting regret suffered by those who intentionally end the lives of their own children.

Peter Stevens from Family Voice also spoke at the launch and gave great support to the campaign from the beginning. It was a great beginning and the attendees, many of whom had never been actively pro-life, were inspired to be generous with their time for the duration of the campaign.

Another strong Christian supporter was Warwick Marsh of The Canberra Declaration. Members of his group had independently decided to fast throughout October, in response to a years-old request from the Catholic bishops for Christians to fast for marriage and family during that month. While that initiative appears to have gone by the wayside from the Catholic side, Warwick Marsh and his network have continued this sacrifice for the sake of families. This meant that they were already primed to assist us with prayer support.

Many graces were received by the participants over the course of the campaign. One attendee opened up about her own abortion, which she had undergone many years ago as a teenager. This was the first time she had ever spoken about it. Others felt that they were given new opportunities to share the pro-life message with their families and friends. Some were also able to have meaningful conversations with members of the public who passed by the vigil site and asked about our presence there. These were all fruits of the generous prayer and fasting to which so many contributed.

We were aware that discouragement could be a problem, especially as the campaign progressed. It is only human to see reports of babies being saved elsewhere and to forget that, for His own reasons, God often chooses to hide the fruits of our spiritual efforts. However, the many graces that flowed to our campaign meant that feelings of discouragement were short-lived and that, until the end, a supernatural faith in our efforts bearing unknown fruit prevailed. Even during the final week, new participants were signing up, some praying publicly to end abortion for the first time in their lives. 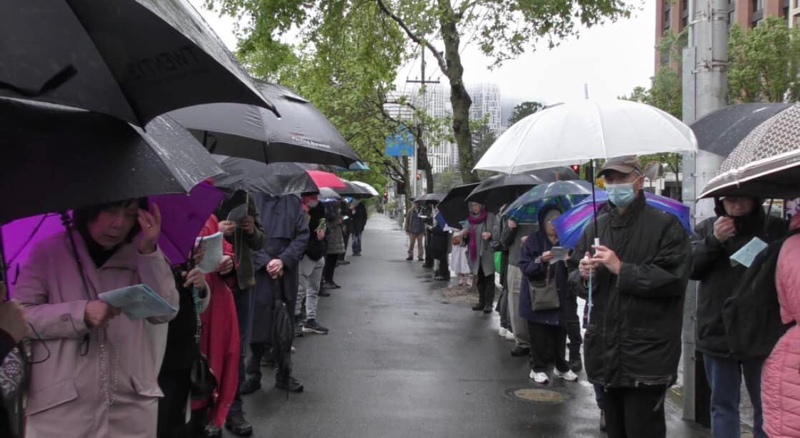 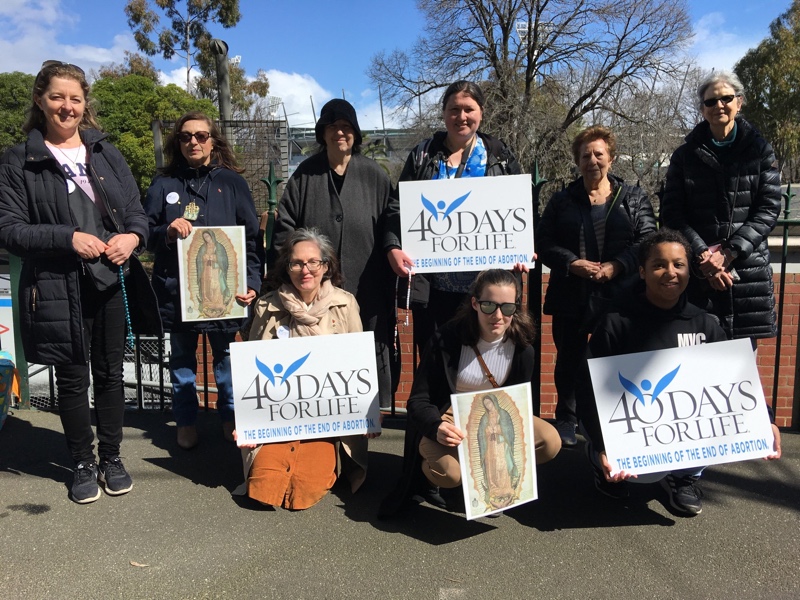 So while the bubble-zones made it harder for us, there was more merit to our sacrifices, as we are there in the pure faith that our prayers and fasting would help without our receiving the consolation of seeing a mother and her baby saved from abortion.

The abortion business which was the focus of this year’s campaign was the notorious Fertility Control Clinic (FCC), which has been the site of the deaths of tens of thousands of tiny babies since it opened in 1972. Prior to the exclusion-zones going into effect, the efforts of the pro-life community here, particularly the Helpers of God’s Precious Infants, had led to more than three hundred mothers choosing life over abortion outside that place.

During the campaign, I often took the first shift and parked directly across the road from the Fertility Control Clinic. Sometimes I would see women entering the FCC and one woman in particular sticks in my mind. She appeared to be very uncomfortable with her decision to enter the abortion business and was pleading with a man – it looked like her boyfriend – not to go in to have their baby killed.

She didn’t look like someone who was committed to the idea of an abortion. In the past, before the bubble-zones, an ambivalent woman like that may have accepted help from a vigil attendee and decided to keep her baby. It was heart-breaking to think that a law, ostensibly designed to protect “choice”, harmed this woman and killed her child by removing her chance to choose life at the final, critical moment.

This bubble-zone law was sold as being about medical “privacy” when clearly in the words of a coerced post abortive mother, “it was about secrecy!”

While my team had planned to run another campaign next year in Lent, circumstances have now made that impossible. It is our hope that  some dedicated members of the pro-life community will be inspired to build on the successes of our campaign and continue this vital public witness for life.

“Abortion not only destroys a child, but I believe it also destroys the mother to some extent, even those who seem to be unaffected at the time.  Somewhere in the depths of their being, they surely must realise that they have lost a child – and at their own hands. Some pregnancies are unwanted, and some are unplanned.  Unfortunately many women feel they have no choice and no help.  It’s a sad reflection on our society that we have made something so natural seem so difficult.  Also we seem to have convinced women that this procedure is healthcare when it is just life and soul destroying. My inspiration… “As you did it to the least of these, you do it unto me”. (Mt 25:45)”

The Christian position has always been, whatever the circumstances of the child’s conception; “Every child should be welcomed.” A grave error of our day is to believe that we humans have the right to choose who lives and who dies, so, like the early Christians who were known for their love of pagan Rome’s discarded children, we must continue to share our message of welcome through campaigns like 40 Days for Life. 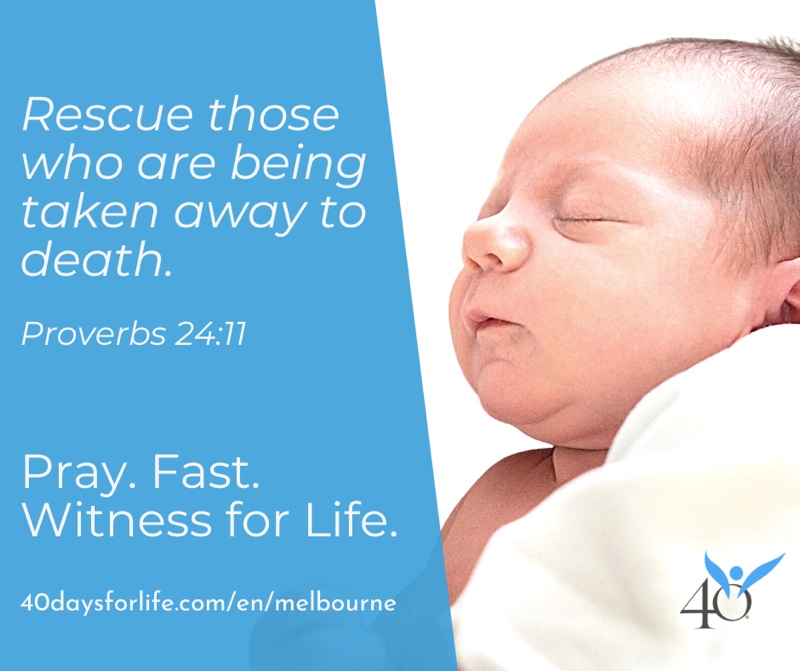