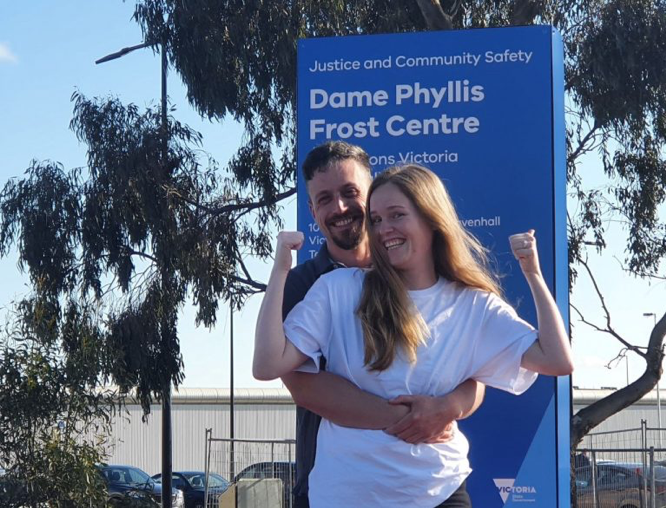 Reignite Democracy Australia (RDA) has been one of the country’s most successful grassroots movements in recent times, galvanising the widespread opposition to harsh COVID lockdown measures and more recently, to vaccine mandates. The organisation has proved so popular that the Andrews government stooped to extremely draconian measures in order to silence its founder, Monica Smit.

Miss Smit was arrested on charges of “incitement” last month after promoting Freedom Rallies which were held in Melbourne on August 11th and 21st. The rallies coincided with similar events held internationally in response to government overreach and vaccination programmes that are effectively being made compulsory.

The bail conditions originally proposed by the Victorian police to be applied to Monica Smit were particularly onerous. In addition to provisions demanding that Miss Smit abide by all directions from the Chief Medical Officer, there were some alarming conditions including a prohibition on publishing any information that contradicts the CMO’s advice; a prohibition on discussing alternative points of view relating to the CMO’s advice and on sharing platforms for those alternative points of view;  and the deactivation of Miss Smit’s personal social media accounts as well as those of RDA. Her legal team argued that the bail act was being used to silence their client, in violation of the act’s purpose.

This amounts to a degree of censorship which is unheard of in this country, and which points to the government feeling extremely threatened by alternative opinions. Although these conditions were ultimately not imposed by the court, the bail conditions proposed by the magistrate were little better: information contrary to the CMO’s advice was to be removed from the RDA website; and Miss Smit was prohibited from sharing any such information.

Because the bail conditions represented such a gross violation of democratic freedoms, Miss Smit chose to remain in prison rather than submit to them. Thanks to COVID quarantine measures, this time was spent in isolation; this proved to be providential as the prison where Monica was being held has the reputation of being the roughest women’s institution in the country.

Monica’s next Magistrate’s Court hearing is set down for November, when she will face charges of incitement and failure to follow the Chief Health Officer’s directives.

The level of control being exerted by governments to maintain a narrative surrounding COVID-19 and its vaccines can be gauged by the media coverage of Monica Smit’s case. Mainstream news in Australia has had little to report on her arrest, her imprisonment or her release ; whatever has been reported has been generally unfavourable towards Miss Smit and RDA, often aligning them with notorious extremists.

It has so far fallen to alternative media to report on this case in tones that reflect the true danger to our democracy posed by these events. Internationally, the response has been better, in part because Australia is under tremendous scrutiny for its state governments’ strategy of ongoing lockdowns and a perceived failure to respond on the part of citizens.

It is ironic that many opinions put forward by RDA are endorsed by some of the most intelligent medical specialists both in Australia and overseas. Opinions on the ineffectiveness of masks, known harms caused by lockdowns and the potential harms caused by experimental COVID vaccines are not limited to a fringe-element of conspiracy theorists, but are being expressed by highly-educated scientists and doctors. It is more than irresponsible for our governments to ignore these legitimate concerns and it is rather alarming to think that an ordinary citizen advocating those opinions can be arrested and silenced.

The situation is becoming increasingly concerning as both New South Wales and Victorian governments are floating the idea that those who refuse COVID “vaccines” will be disallowed from their places of worship once the states open up. Neither “roadmap” from these states indicates that any liberties whatsoever will be given to those who remain unvaccinated once the states reopen.

Although he later back pedalled, NSW health minister, Brad Hazzard, has said that only those who are vaccinated will be allowed back into churches and other places of worship.[1] Similarly, the Victorian government’s “roadmap” specifies that once vaccination targets are met, freedoms will be returned only to the state’s vaccinated residents.

The undemocratic nature of Monica Smit’s persecution, coupled with VicPol’s heavy-handed enforcement of COVID regulations, should make us look very deeply at what is behind the Andrews’ governments’ modus operandi. It is very difficult to consider Daniel Andrews’ suspicious ties with China, his personal commitment to the culture of death and to witness footage of VicPol’s “stormtroopers” decked in full riot gear without concluding that the state is at the mercy of some highly nefarious forces.

Monica Smit’s press release from prison included her sentiment: “I’d rather be in jail with no rights than to willingly sign them away.”

Signing our rights away is precisely what we are doing when we uncritically accept vaccines as a condition of employment, fail to voice our concern about lockdown measures or allow our churches to remain closed for months on end. The problems facing Victoria in particular and Australia in general are not the kind that will simply be resolved in future elections. Our window for protecting democracy is fast closing: without more people like Monica Smit taking a public stand, that window could close indefinitely.