Late in 2022, a group of faithful Catholics gathered in a Sydney church to pray the Rosary. Some were parishioners, others had come from afar; all were there for the single purpose of making reparation for the evil thing which was happening in a hall on the church grounds: a homosexual priest was promoting his book with the blessing of the local parish priest.

The parish is Sacred Heart Westmead, and the parish priest is Fr Walter Fogarty. Father Fogarty’s response to seeing Catholics acting the way they have always acted in times of crisis was to act the way enemies of the Church have always acted, by persecuting the innocent. He called the police to have the faithful removed from his church. The book launch continued and it is safe to say that Fr Fogarty knew he was in little danger of being reprimanded, since his parish is under the jurisdiction of Bishop Long – notorious for his protection of aberrant clergy and for his own promotion of the homosexual agenda.

The book in question is called, “Memoirs of a Reluctant Cleric”, and was written by Fr Peter Confeggi, a former Franciscan. Confeggi retired in 2019 and wrote his memoirs during the COVID lockdowns. The book had been officially launched earlier in Tasmania, Confeggi’s current home, and this was done from an Anglican Church. Apparently, the Archbishop of Hobart had prohibited the launch from taking place on Catholic Church property. The date of that launch was September 8th, a day full of meaning for faithful Catholics, but also for those who enjoy mocking the Faith.

With its lists of names of nuns and priests deemed to be approved by Peter Confeggi, it would make a helpful handbook for any Australian religious seeking to make contacts in the vice-ridden world of the Catholic homosexual network. Orthodox priests and prelates are singled out for extended analysis by Confeggi – a warning to fellow sodomites of parishes and dioceses to be avoided.

By far, the most scandalous theme throughout Confeggi’s Memoirs is his promotion of aberrant sexual behaviour. He relates how, during a mid-life crisis, he “named and addressed his own sexuality,” [Memoirs, p 59] and goes on to explain how he has “found many gay and lesbian laity, religious and clergy in education, counselling and pastoral care who … have had to fly under the radar because of their sexual orientation and private lives…”

Confeggi attributes the inability of these people to out themselves as homosexual, not because of God’s objective prohibition on sexual sin, but rather is due to the “ultra-right waiting to purge Catholic institutions in the name of freedom of religion.” [Memoirs, p 60.]

However, as might be expected, Fr Confeggi’s crimes are not limited to his endorsement of homosexuality. He is a proponent of a religious indifferentism which extends to inviting Muslims to read the Koran inside the church prior to Midnight Mass [Memoirs, p 70] and organising parish tours of the local mosque. Confeggi is also a big supporter of women’s ordination, and mentions his friendship with a female Episcopalian “priest” whom he met while studying in Paris.[Memoirs, p.47] 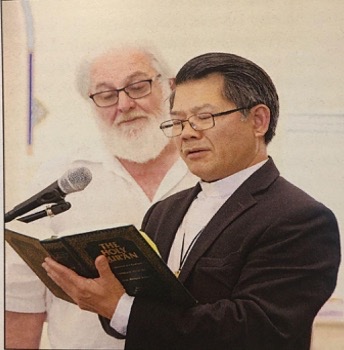 The choice of cover for Confeggi’s book is an intriguing one: woven fabric of little artistic merit is shown in closeup, and the subtitle, “Weaving his world with the Word’‘, accompanies the main title. “The Word”, according to proponents of 19th century esoteric religions, was a false Christ, whom they believed had the power to divinise human beings.

Confeggi’s use of the woven fabric could merely indicate the aesthetics of an elderly priest, yet it also supports the idea that there is an occult meaning hidden in the cover design. Handcrafts such as weaving are popular among Wiccans and Pagans, and are sometimes incorporated into their spells and rituals. Although it may be mere coincidence, Confeggi himself mentions his fondness of New Age practices such as the Enneagram, as well as an appreciation of Carl Jung.

The term, “weaving”, is repeated in Confeggi’s account of himself presiding over John Marsden’s funeral. Marsden, a notorious homosexual, had, as a seminarian, taught Confeggi to serve the Mass. Confeggi writes that planning for the funeral could have “formed the basis for a doctoral thesis,” [Memoirs p 68.] then goes to use the curious language, “… the pages of funeral planning had to be brought to ritual.” [ibid] Later, Confeggi adds that he  “…. continued saying that John was far more than his sexual orientation and proceeded to weave the Word with some of John’s life experiences.” [ibid] Confeggi’s comments are less like the terminology of a Catholic priest and more like the language of a New Age practitioner.

While the priest may have included some hints about the arcane, he omits some of the details of the funeral which are on the public record: that included in Marsden’s coffin were “…. his rosary beads, a couple of bottles of whisky, a phial of amyl nitrate (the gay community’s drug of choice) and a marijuana joint.”

Another character of interest found in Confeggi’s book is the late Fr Gerry Iverson. Fr Iverson and Confeggi were long-time friends and even holidayed together overseas. Fr Iverson features in a whistle-blower book by the ex-priest, Kevin Lee, who, before his tragic death in 2013, tried to expose predator priests. Lee had been a seminarian at Manly Seminary when Fr Iverson was rector, and the overt homosexuality he witnessed there – one area of the seminary was known as “the AIDS wing” –  was one of the experiences which led him to write his book.

Throughout his book, Lee stressed that over and over, his attempts to convince church leadership not to tolerate sodomite seminarians and priests were unsuccessful. Lee was so devastated that he eventually gave up the priesthood for a woman. Lee relates that when he and two other seminarians confronted Fr Iverson over the rampant homosexuality they had witnessed, his response was, “I don’t think the fact that a person is a homosexual, or has a homosexual orientation is a reason to exclude them from the priesthood …. In fact, I have many homosexual friends who are priests and they make excellent pastorally sensitive leaders in their communities.”

In Chapter 12 of the book, Lee related an incident in which an inebriated homosexual seminarian confided to him that he and Iverson were “very close” and that the seminarian “knew too much” to be ejected from the seminary.

Fr Iverson lived with Fr Confeggi during his final phase of Parkinson’s disease, dying at a  nearby Catholic nursing home. Confeggi relates that he “had the privilege of resting alongside him the night he died.” [Memoirs, p 77.]

It is legitimate to ask how and why Peter Confeggi and priests of his ilk are, as self-identifying homosexuals, able to continue in public ministry. Their freedom to flout Church teaching with impunity stands in contrast to those conservative priests who are removed from their parishes and effectively “canceled” for merely promoting Catholic orthodoxy.

The faithful who have raised objections to Fr Confeggi’s continued status as a priest in good standing have found that they don’t have anywhere to turn. Bishop Long appears intent on protecting these immoral priests. In May last year, members of the Parramatta Diocese submitted a request to Rome, asking for Bishop Long and his associates to be removed for their anti-Christian stance on homosexuality, as well as for their attempts at introducing a sexualised, anti-Catholic curriculum into Parramatta’s schools; for their bullying of devoted priests and for financial corruption.

Rome has given no reply, nor has any Australian bishop publicly commented on one of their confreres being censured by the faithful. It is difficult to attribute a charitable motive to this state of affairs. The other bishops can hardly be unaware of the levels of heterodoxy evident in the Parramatta diocese nor can they fail to know of the vast numbers of sodomite clergy within their ranks. 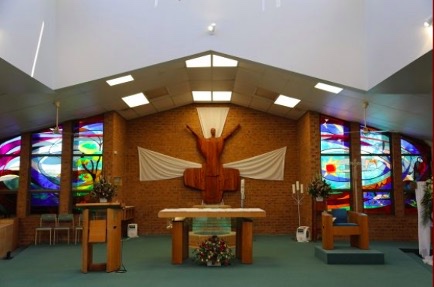 As autobiographies like Fr Confeggi’s Memoir show, dissident priests are quite open about their disdain for the true teaching of Christ. These priests are in great need of our prayers, as are our bishops, whose role it is to teach, govern and sanctify and who, it would seem, have abandoned that role.