This article is based on a work by Roberto de Mattei, on the life of Dr. Plinio Corrêa de Oliviera called, “Prophet of the Reign of Mary.”

Catholics who live the message of Fatima are undoubtedly wondering whether we have entered the final period of confusion which precedes Our Lady’s Triumph. So many of us are fond of reminding each other that, “In the end, Her Immaculate Heart will triumph”. This is, of course, our dear Mother’s promise that despite the failure of successive popes to adequately consecrate Russia, and despite Russia then widely spreading her errors, there will come a time of renewal, or restoration for our Church and the world.

The astute and visionary Brazilian, Plinio Corrêa de Oliviera, spoke frequently of this blessed time, and of the period of chaos which would precede it. Dr Plinio named the troubling future epoch, The Bagarre, which is the French word for confusion. He characterised The Bagarre as a manifestation of the consequences of our failing to heed Our Lady’s message at Fatima, and investigated some of Catholicism’s greatest saints for their insight into both of these epochs.

Saints of the Latter Days

Dr Plinio particularly draws our attention to a great saint of the Holy Rosary, St Louis Grignion de Montfort. In his book, the Treatise of True Devotion to Mary, St. Louis provides seven principles which indicate that a reign of Mary will certainly come to pass towards the end of human history. St. Louis explains that God wills that Our Lady reign due to her great humility, because of her status as God’s masterpiece, and because she is the dawn of the Sun of Justice, Jesus Christ. He reminds us that Jesus came into the world through Mary and will do so again. St Louis also points out that Our Lady is the surest way to Our Lord, that She is a refuge for poor sinners and that She will provide succour for those who fight the forces of darkness.

St. Louis predicted that the reign of Mary would arrive “when God’s Mother is enthroned in men’s hearts as Queen, subjecting them to the dominion of her great and princely Son.” He uses the phrase, “Ut adveniat regnum tuum, adveniat regnum Mariae’ (“Lord, that your kingdom may come, may the reign of Mary come”) – a phrase repeated by Archbishop Athanasius Schneider in his preface to Dr. Plinio’s book.

Another saint who was included in Dr Plinio’s “Apostles of the Latter Times” was St Vincent Ferrer. St Vincent lived in the fifteenth century, preaching conversion and the imminent arrival of the Antichrist. He claimed that the end times would be heralded by men wearing women’s clothing and women wearing men’s attire. It is interesting to note that St Vincent was misled for some time about the identity of the true pope, and placed his confidence in the anti-pope Clement VII. Dr Plinio considered St Vincent to be akin to an Old Testament prophet, calling God’s people back to Him in order to avoid a chastisement.

Thus, it can be said that the reign of Mary is nothing other than the Social Kingship of Christ, which Dr. Plinio describes as ”an era of virtue in which humanity, reconciled with God in the bosom of the Church, will live on earth according to the Law, in preparation for the glories of heaven.”[1]

Dr Plinio noted that this epoch would be wonderful and more than simply an absence of conflict. In response to the great turbulence by the Church in his time, he wrote:

“There is a difference between a victory and triumph: a triumph is an outstanding victory, a great victory, not an ordinary victory. Our Lady announces her triumph, that is, a victory with glory in which she will completely master the situation. Therefore we will have the Reign of Mary, for one does not understand that she would win without being Queen.”[2]

It is fitting that there has been a resurgence in devotion to the Sacred and Immaculate Hearts in recent years.  In 2010, Pope Benedict XVI consecrated all priests to the Immaculate Heart from Fatima. This past March, on the Feast of the Annunciation, twenty-two countries were consecrated by their bishops to the Immaculate Heart.[3] But the most significant act of consecration took place in England only a few days ago. While half a million watched from home, under the UK’s strict lockdown, England was rededicated to Our Lady of Walsingham as Our Lady’s Dowry. Catholic historian, Hillaire Belloc, once concluded that the Protestant Revolution would have come to nothing, had England not left the Church and this reorientation of England toward her Mother suggests the reunification of Christendom is in reach.

Despite the dazzling promise of unity, virtue and peace, the coming era will not be without its trials and sufferings. Dr Plinio wrote in 1985 that, “as a punishment for men,” there would always remain the shadow of an imminent chastisement or “a sword of Damacles.” Even the most joyful occasions will be tinged with the thought of this threat. This is hardly surprising, given that mankind will have the memory of The Bagarre so fresh in its collective mind, and will know that whenever another great chastisement is brought to bear on man, it will be the final conflict before the end of the world. Plinio suggested that the glorious age would immediately end if society returned to immorality, pride or egalitarianism.

Dr Plinio described The Bagarre as the zenith of the Revolution, but assures us that this is not the time of the Antichrist. Rather it will be a type of those days and that it will be “one of the most majestic and tragic events in world history.”[4] He quotes the Fiery Prayer of St. Louis de Montfort:

“Thy Divine Law is transgressed. The Gospel is ignored. Thy religion abandoned. Torrents of iniquity overwhelm the world, carrying away even Thy servants; the whole earth has become desolate; impiety is enthroned; The sanctuary is profaned and abomination has reached even the holy place.”[5] 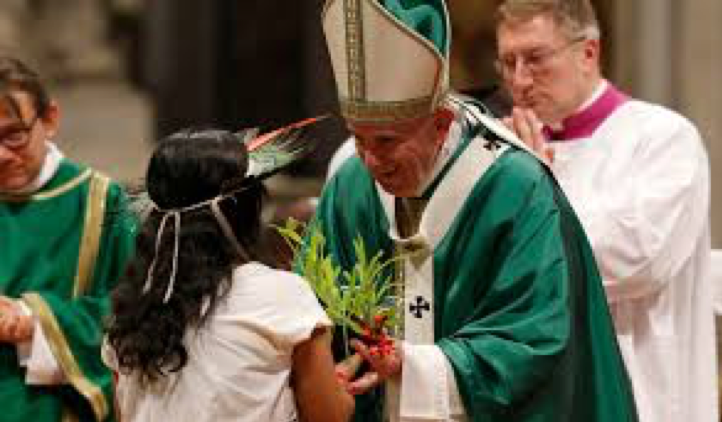 Pope Francis receives an offering for Pachamama during the closing Mass of the Amazon Synod, held in St. Peter’s Basilica. The offering was then set on the altar.

It is said that The Bagarre will consist of a series of calamities – as Roberto de Mattei says,  a “synthesis of all punishments” – including epidemics, wars, natural disasters and famine. One can immediately see here a correspondence with the “synthesis of all heresies”, – modernism.

These punishments will be compounded by mankind’s rejection of virtue and love of immorality. The chastisement’s beginning and end will be brought about by angels, and the earth will be purified.

In a recent article, Roberto de Mattei develops the theme of The Bagarre, and explaining how it is in the nature of sin to be its own punishment:

“At Fatima Our Lady announced that if the world will not convert, various nations will be annihilated. Which nations will these be? And in which way will they be annihilated? What is certain is that the principal chastisement is not the destruction of bodies, but the darkening of souls. In Sacred Scripture, we read “that by what things a man sinneth, by the same also he is tormented” (Wisdom 11,16). The same thought, from the mouth of pagan Seneca, reminds us that “the chastisement of the crime is in the crime itself.” [6]

This chastisement, to the faithful Catholic, must be seen in the light of God’s mercy and justice. It should be no surprise that God would punish the world in order to bring mankind back to its Creator. In fact, Dr Plinio believed that such an event is inevitable since man is so mired in his sin, that it would be almost impossible for the bulk of the population to convert without it. He wrote that some balancing intervention would be needed when the Revolution “had reached a pinnacle of pride and sensuality worldwide.”

This brings us to a very pertinent question: what of all those priests, bishops and cardinals who fail to see that this current crisis is a manifestation of God’s love for us – and more: a chastisement for their own failure to adequately hand on the Faith? What of all those prelates who honour Our Lord and Our Lady with lip-service, who do not recognise the signs of the times and Our Mother’s impending Triumph? Do those who have so hastily closed our churches and denied the Sacraments to millions of Catholics have the faith to face this crisis with integrity, and to endure whatever comes next, even if that is martyrdom?

No discussion of the Triumph would be complete without a reference to the false philosophy of Millenarianism. This is the notion of Christ coming to reign among us in a physical sense and has been condemned by the Church since Christianity began. Some hallmarks of Millenarianism are: an absence of evil and suffering; the end of the Church, Sacraments and human institutions; the belief that all men will be saints; and a literal thousand-year reign of Jesus Christ.

These false ideas have found their way into some contemporary private revelations and should therefore arouse suspicion among faithful Catholics. There can never be an earthly existence without suffering and self-control and as Dr. Plinio said, “…imagining a world without struggle and setbacks is the same as conceiving a world without Jesus Christ.”[7]

As Roberto de Mattei points out, the heresy of Millenarianism has been absorbed into the modern-day pursuit of an egalitarian Utopia – a “universal democracy” which has its adherents in both the secular and Christian world. The love-affair that many of our Church leaders have with egalitarianism points to an ideology tainted with Millenarianism.

Russia has, indeed, spread her errors and the results have been disastrous. The Chinese Communist Party has allowed the entire world to be afflicted with a disease that could have been managed had humility and common sense prevailed. Instead, the Communist hegemon allowed its citizens to spread COVID-19 to the four corners of the earth. Communist China’s model of religious persecution has become a reality in the entire world, if not in ideology, then in practise as countless thousands of Churches are closed to the faithful.

As Dr. Plinio said in his time, “All is unleashed because Our Lady went unheeded.””[8]

Those who read this, the supporters of FLI and others of like mind, are in no doubt as to the gravity of the situation before us. Maintaining the correct perspective is critical as we enter this period of purification, The Bagarre. Counter-Revolutionaries can take heart from Dr. Plinio’s call to arms:

“We represent everything which the Revolution gradually destroyed and Our Lady would want to continue living in us. In us live the remnants of all the past glories of Christendom. Through enraptured, enthusiastic, tender and nostalgic admiration in us live the heroism of the martyrs, the grandeur of doctors, the strength of confessors, the splendour of Cluny, the magnificence of chivalry, the sacral audacity of the Crusades, the force of the Counter-Reformation, the fire and perspicacity that characterized so many champions of the Counter-Revolution in the nineteenth century and in our days, the anti-Modernist zeal of Saint Pius X, the courage of a Garcia Moreno. Men reject all that even when placed at the highest echelons of the Holy Roman Catholic and Apostolic Church.