Suggested Meditation on
the Luminous Mysteries

The Baptism in the Jordan 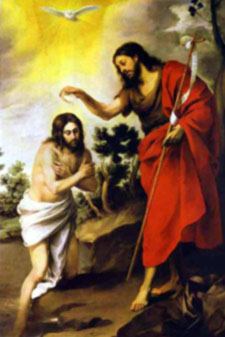 As Christ descends into the water, the innocent one who became ‘sin’ for our
sake, the heavens open wide and the voice of the Father declares him the beloved
Son, while the Spirit descends on him to invest him with the mission which he
is to carry out.

That each of us will take up the mission of Christ, particularly in the
protection of the unborn.

Then Jesus came from Galilee to the Jordan to be baptized by John. But John tried to deter Him, saying, “I need to be baptized by you, and do you come to me?”
Jesus replied, “Let it be so now; it is proper for us to do this to fulfill all righteousness.” Then John consented.
As soon as Jesus was baptized, he went up out of the water. At that moment heaven was opened, and he saw the Spirit of God descending like a dove and lighting on Him. And a voice from heaven said, “This is my Son, whom I love; with Him I am well pleased. (Matt 3,13-17)

The Wedding Feast at Cana 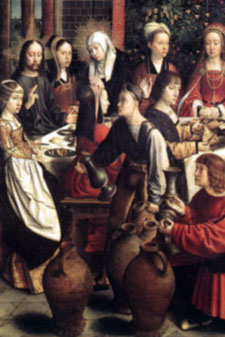 The first of the signs, given at Cana, when Christ changes water into wine and
opens the hearts of the disciples to faith, thanks to the intervention of Mary, the
first among believers.

That we will always faithfully follow Mary’s words: “Do whatever
he tells you” and we will thus walk in Jesus’ path.

On the third day a wedding took place at Cana in Galilee. Jesus’ mother was there, and Jesus and His disciples had also been invited to the wedding. When the wine was gone, Jesus’ mother said to Him, “They have no more wine.”
“Dear woman, why do you involve me?” Jesus replied, “My time has not yet come.”
His mother said to the servants, “Do whatever he tells you.” Nearby stood six stone water jars, the kind used by the Jews for ceremonial washing, each holding from twenty to thirty gallons. Jesus said to the servants, “Fill the jars with water”; so they filled them to the brim. Then he told them, “Now draw some out and take it to the master of the banquet.” They did so, and the master of the banquet tasted the water that had been turned into wine. He did not realize where it had come from, though the servants who had drawn the water knew. Then he called the bridegroom aside and said, “Everyone brings out the choice wine first and then the cheaper wine after the guests have had too much to drink; but you have saved the best till now.”
This, the first of His miraculous signs, Jesus performed in Cana of Galilee. He thus revealed His glory, and His disciples put their faith in Him. (John 2,1-12)

The Proclamation of the Kingdom 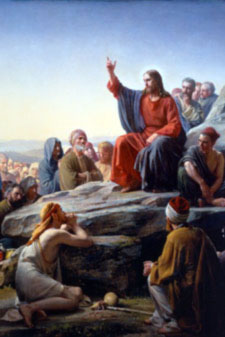 The preaching of Jesus proclaims the coming of the Kingdom of God, calls to
conversion and forgives the sins of all who draw near to Him in humble trust:
the inauguration of that ministry of mercy which he continues to exercise until
the end of the world, particularly through the sacrament of reconciliation which
he has entrusted to His Church.

That the call to conversion by Jesus will be heard by all mothers
and fathers who have aborted any of their children or are
contemplating aborting their child. Also, we pray for the conversion
of the abortionists and their staffs.
May they repent of their wrongdoing and be
open to the merciful forgiveness of Jesus. 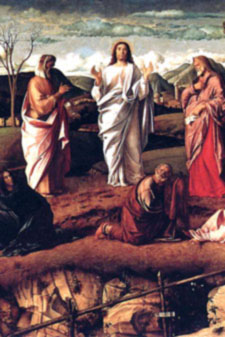 On Mount Tabor, the glory of the Godhead shines forth from the face of Christ
as the Father commands the astonished apostles to ‘listen to him’ and to prepare
to experience with him the agony of the passion, so as to come with him to the
joy of the resurrection and a life transfigured by the Holy Spirit.

That we will listen to Jesus and allow His words to transform our
lives so that we too may ultimately enjoy the resurrection.

About eight days after Jesus said this, he took Peter, John and James with Him and went up onto a mountain to pray. As he was praying, the appearance of His face changed, and His clothes became as bright as a flash of lightning. Two men, Moses and Elijah, appeared in glorious splendor, talking with Jesus. They spoke about His departure, which he was about to bring to fulfillment at Jerusalem. Peter and His companions were very sleepy, but when they became fully awake, they saw His glory and the two men standing with Him. As the men were leaving Jesus, Peter said to Him, “Master, it is good for us to be here. Let us put up three shelters–one for you, one for Moses and one for Elijah.” (He did not know what he was saying.)  While he was speaking, a cloud appeared and enveloped them, and they were afraid as they entered the cloud. A voice came from the cloud, saying, “This is my Son, whom I have chosen; listen to Him.” When the voice had spoken, they found that Jesus was alone. The disciples kept this to themselves, and told no one at that time what they had seen.(Luke 9,28-35)

The Institution of the Eucharist 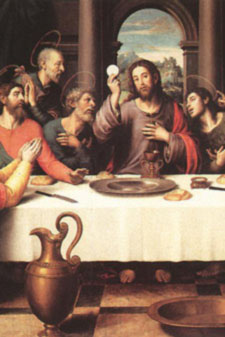 Christ offers His body and blood as food under the appearance of bread and
wine and testifies to the end his love for humanity, for whose salvation He will
offer himself in sacrifice.

That all the unborn children will be allowed to be born and to share
with all of God’s people the sacrificial banquet of the Lord.

While they were eating, Jesus took bread, gave thanks and broke it, and gave it to His disciples, saying, “Take it; this is my body.”  Then he took the cup, gave thanks and offered it to them, and they all drank from it.  ”This is my blood of the covenant, which is poured out for many,” he said to them. “I tell you the truth, I will not drink again of the fruit of the vine until that day when I drink it anew in the kingdom of God.” (Mark 14,22-25)
The Luminous Mysteries2009-05-162017-06-13https://www.fli.org.au/wp-content/uploads/2014/02/FLI-Logo.pngFLIhttps://www.fli.org.au/wp-content/uploads/2017/06/holy-spirit.jpg200px200px
Recent Posts
Save a Life