Parramatta Diocese’s Bishop Long has unveiled the latest iteration of his safeguarding programme, dubbed “The Parramatta Way”, and it is illustrative of some problems which are rife throughout the Catholic Church in Australia. His new policy also shows that deviating from Church teaching has practical consequences for both body and soul.

The document illustrates two serious problems which are currently infecting the Church and to which the Plenary Council has not been immune, that is, encouraging syncretism and secondly, using child protection as a Trojan Horse for promoting sexual deviancy. Coupled with this latter problem is a failure to address the real cause of child abuse within the Church: lax morals, and especially homosexuality, on the part of the clergy. This means that children are left without real protection and are instead more open than ever to abuse by people without self-restraint who occupy positions of power within the Church.

The syncretism being promoted by Parramatta Diocese is part of a push throughout the wider Church to accommodate and in some cases, substitute, paganism for authentic Catholic teaching. While the document states that its main priority is to “act justly,” its acknowledgment of the traditional custodians of Parramatta, its use of indigenous symbolism rather than Catholic imagery and its failure to mention God apart from a sole scripture verse, are evidence that no justice has been shown at all to God, the respect of Whom should be the highest priority of every Catholic institution. The “Parramatta Way” claims that the Diocese promises to uphold “laws and obligations” without reference to God’s law or its own moral obligation to hand on the Faith, untarnished by the world’s fleeting fashions.

“The Parramatta Way of Safeguarding” is summarised in an artwork created by an Aboriginal artist and which is on display at the Diocese’s head office. The artwork lists the Diocese’s priorities and is decorated with indigenous-inspired representations of the local area and its inhabitants. Although ostensibly dedicated to protecting children, the text barely mentions this issue, providing no concrete guidelines for preventing abuse and instead encouraging all manner of flowery and vague concepts such as tolerance, acceptance, and respect. One article mentions that the cliches were “developed by a representative group of community members from the Diocese,”[1] but one wonders how great an effort was required to come up with a list of trendy buzzwords which have all but lost their meaning. 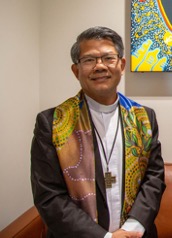 Apart from a Chi Rho, which is unfortunately rather insignificant, the artwork itself contains nothing recognisably Catholic. By contrast, it is instantly recognisable as being painted in the indigenous Australian tradition. The artist describes his work as representing a multitude of relevant factors: a meeting with officials in Rome, Parramatta’s seminary and its forty-six parishes, and geographical features of the region, for example the Three Sisters and two rivers.[2]

The theme of indigenous symbolism reappeared on the stole worn by Bishop Long while blessing the “Parramatta Way” artwork. His choice of stole, which is a sacramental – meant to be a sacred sign – reflects his Diocese’s poor grasp of the primacy of God over pantheism. This trend, however, is becoming all too common among Australian clergy, and violates the General Instruction of the Roman Missal which clearly states that vestments be decorated only with “images or symbols, that evoke sacred use”.[3]

The Scripture verse used by Parramatta Diocese to justify its policy is one that has been co-opted by many revolutionary forces within the Church. From the Old Testament book of Micah, it reads: “This is what the Lord asks of you: only this, to act justly, to love tenderly and to walk humbly with your God.” (Micah 6:8)

Presumably, the words “only this” are interpreted by modern Catholics as a licence to do away with what is perceived as the excrescences of tradition: solid catechesis, orthodox liturgical practice and the need for an impeccable standard of morality, especially sexual morality.

Less common, however, among Modernists, is a recognition of the more demanding sections of the Bible, such as Jesus’ words from the Gospel of Matthew, in which He commands us to “love the Lord your God with all your heart, with all your soul, and with all your mind” because this is “the greatest and the first commandment.”[4] Truly putting God first leaves no room for acquiescence to other religions, no matter how relevant the world may think they are. Every attempt by the modern Australian Church to accommodate indigenous spirituality through incorporating “Welcome to Country” rituals and smoke ceremonies or by using pagan symbolism violates this directive of Jesus by putting false gods on a par with the Trinity.

The subsequent section from Matthew’s Gospel gives an equally challenging and equally misunderstood directive from the Lord: “love your neighbour as yourself.” It is not love to affirm a person’s sin, whether that is a sin of sexual immorality, or of pride or of greed. Rather, being tolerant of sin by promoting it or by affirming sinners shows the greatest disdain possible towards another person’s soul: by allowing that person to continue on the path to hell without attempting to stop him or her.

The text of “The Parramatta Way” gives a clue as to the hold that sexual perversion has over the Diocese when it states that it will “accept any person for who they are and where they are at in their lives” and “prioritise children and care for those who may be in a difficult situation or at risk of harm for whatever reason.” This latter portion is code for a phenomenon that has cropped up in various “safeguarding” documents throughout Australia’s Catholic institutions – namely that Catholic employees, including priests, are expected to support the sexual preferences of anyone in their care, including the same-sex attracted and the gender dysphoric. Promoting these aberrations, rather than the providing of real protection for children, is frequently behind moves to develop safeguarding guidelines in our Dioceses.

Rather than pretending that a piece of artwork with its vocabulary of Modernist jargon can solve the problem of child abuse, the Diocesan machinery would be better employed by holding its own religious education curriculum to the (admittedly low) standard set out in the “Parramatta Way.”

Its draft curriculum, which was set to be rolled out last year, but was paused after backlash from parents and other concerned groups, was full of religious syncretism and gender ideology. This flies in the face of the Diocese’s guideline of  “zero tolerance for any form of abuse or harm to children.” As FLI has pointed out in several articles, teaching children a watered-down version of the Faith, promoting indigenous spirituality and grooming them to accept an LGBTI lifestyle harms both their bodies and souls – not to mention those of their teachers. This is abuse, the tolerance of which nullifies any other attempts at protecting children, however well-meant they may be.

If there is any doubt that the Parramatta Diocese has its priorities skewed, a look at its website dedicated to “Safeguarding”[5] makes this very clear. Its homepage shows firstly a video from Bishop Long, followed by the “Parramatta Way” artwork, then an acknowledgement of Traditional Custodians – complete with a tribute to Mother Earth. A few other links are scattered throughout the list, but the most exasperating thing is that an acknowledgement to victims of abuse is preceded by the acknowledgement of Parramatta’s indigenous inhabitants. Surely a website dedicated to child protection would acknowledge abuse victims first! Apparently not, in these days when representatives of the Church fall over themselves to breathlessly check every politically correct box.

The authors of the text appear to have overlooked the undeniable fact that perpetrators of abuse have little interest in the welfare of their victims, instead by definition violating their victims’ most fundamental rights. One doesn’t need to be a psychologist to suggest that no abuser will change his or her behaviour one iota by viewing the “Parramatta Way” artwork and its call to “love tenderly.”

The “new way of looking at Safeguarding”, offers little that is new, instead rehashing the banal adjectives doing the rounds at Australia’s chanceries. It has no concrete protections for children, but rather, its tolerance of deviancy and vague concepts put children’s bodies and souls at risk. The entire project is suitable only as an object lesson in the Australian bishops’ stubborn refusal to defend traditional Catholic teaching and represents yet another waste of money and resources generously supplied by the faithful but managed by a profligate Catholic bureaucracy.

The text of the “Parramatta Way”:

The Parramatta Way of Safeguarding is to…
Act with Justice, and state that we have a zero tolerance for any form of abuse or harm to children or any person
Act with justice and ensure that laws and obligations are upheld, and safety is paramount

And promote The principles of Catholic social teaching of dignity, respect, association, participation, support for the vulnerable, solidarity, stewardship, subsidiarity, equality and the principle of the common good.

“This is what the Lord asks of you: only this, to act justly, to love tenderly and to walk humbly with your God.” (Micah 6:8)