In April 2021, Loretta Hoban was appointed as Policy Adviser and Coordinator of the National Redress Scheme (Institutional Historical Sexual Abuse) and as Assistant at the Professional Standards Unit of the Archdiocese of Melbourne. According to her LinkedIn profile, Loretta Hoban’s responsibilities are:

“To provide high level strategic policy advice to create a culture of safety for children in the organisation. This includes policy oversight and advice relating to child safety and the safety of vulnerable people. In addition, the role oversees the operation of the National Redress Scheme for survivors of abuse in the Catholic Archdiocese of Melbourne.“[1]

In practical terms, this means that, among other tasks, Ms Hoban is responsible for educating clergy about child protection, auditing parishes for compliance with safeguarding guidelines, and assisting abuse victims.

Like other employees, Loretta Hoban’s LinkedIn profile also includes details of her previous positions, and until a few days ago, it appeared that she wanted the public to know that this included her work for abortion providers and abortion-friendly NGOs. The most infamous of these is Marie Stopes in Cambodia, but CARE International’s Know and Grow Program is equally anti-life. Strangely, these two listings mysteriously disappeared a few days after the information became public via an obscure Catholic website. 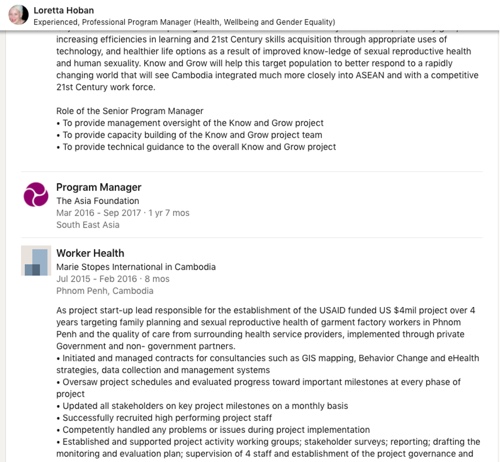 According to screenshots of the original LinkedIn page, Ms Hoban’s job at Marie Stopes was to set up a campaign targeting factory workers in Phnom Penh, in order to supply them with information about sexual and reproductive health and family planning. The campaign was funded by USAID to the tune of 4 million US dollars. 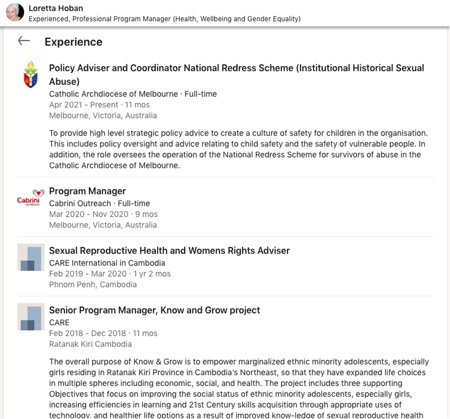 The second entry that recently disappeared from her LinkedIn page detailed one of Loretta Hoban’s positions with CARE International – another remains on the website. This is framed as ‘empowering marginalised ethnic minority adolescents’ by giving them ‘knowledge of sexual reproductive health’; more details are provided in a Buzzfeed news article from 2020, which is still available online. In that article, Ms Hoban describes a mobile phone game developed by CARE to teach factory workers about contraception. According to the article, Ms Hoban lamented the fact that ‘almost all women in Cambodia know that long-term methods like the pill and IUD exist, but only one-third of married women are using these kinds of methods…’ [2] The article explains how the mobile app ‘gamifies the experience of learning about contraception’ and Ms Hoban’s comments appear along with those of other women who advise Cambodian girls about having abortions.

At this point, it should be stated that there remains the possibility that Ms Hoban has renounced her former stance of promoting abortion, and underwent some sort of conversion before being employed by the Archdiocese. Although both the Professional Standards Unit and the Archbishop himself have been given the opportunity by this author to explain the situation, at the time of publishing there had been no response, so we are left to assume that there has been no renunciation.

It is highly probable that Ms Hoban’s former places of employment were not known to the Archbishop of Melbourne, Peter Comensoli, until he was alerted to the fact by this author. But it is beyond belief that they were not known to someone within his Human Resources Department, which indicates that Ms Hoban is not the only advocate for abortion inside the Archdiocesan machine.

When someone in the Melbourne Archdiocese made the decision to hire a former high-level Marie Stopes employee, they may have felt that they had perfectly good reasons for doing so. But there is little doubt that the decision was a poor one.

Many more questions could be asked about such an appointment, but this article will ask just three:

How does it further the mission of the Church to hire an abortion advocate for such an influential position? How can Ms Hoban be trusted to ‘safeguard children’? What are the practical consequences of such an appointment?

In December last year, when commenting on the passing of the Equal Opportunity (Religious Exceptions) Amendment Bill 2021, Archbishop Comensoli wrote that ‘it unfairly targets and undermines the ability of faith organisations to confidently manage employment matters according to their mission.’[3] In fact, ‘mission’ is a common theme of the Archbishop’s and is apparently the driving force behind his unpopular push to restructure the entire Archdiocese into areas he calls ‘missions’. His comments link the Church’s employment decisions with Her mission, and this is also a theme of the Archdiocese’s Code of Conduct for its employees.

The Code of Conduct specifically states that all diocesan employees “are engaged to promote the mission of the Church..”[4] and that they “should strive to present and relate to the world with the Church’s mission first and foremost in their language, symbols and actions.”[5] Clearly, employing someone who holds a position diametrically opposed to the Church’s teaching on life is in direct violation of this fundamental section of the Code.

Another part of the Code states: “… many external to the Church will often see you as ‘the Church’ even when you may not see yourself as such. Employee conduct, both public and private, has the potential to inspire and motivate people. Conversely, it can scandalise and jeopardise people’s faith.”[6]

This is a realistic assessment of the way outsiders view the Church. But whoever hired Ms Hoban must believe, unrealistically, that she has ceased ever to mention that she believes abortion and contraception to be good or helpful or that she has embraced the Church’s teaching on the regulation of birth. It is almost impossible for someone to privately disagree with the Church in these essential areas, without their words and conduct in public and private revealing her true stance.

Knowing human nature, it is far more likely that Ms Hoban will take every opportunity to try to bring Catholics and non-catholics around to her position, which causes us to wonder if this was the reason behind her appointment. Corrupting the Church from within has proven to be a very successful strategy of Her enemies.

The second question to be asked revolves around the specifics of Ms Hoban’s position with the Archdiocese as a member of the Professional Standards Unit, or PSU. The Archdiocese of Melbourne website states that the PSU exists to “provide advice across the Archdiocese to the leadership, clergy, employees and volunteers to ensure that children, young people and adults are safe from all forms of abuse and exploitation” and to “support and sustain a safeguarding culture within parishes, agencies and entities to ensure the safety, protection and wellbeing of children and adults is paramount”.[7]

It hardly needs to be stated here that although all forms of abuse are heinous, abortion is the very worst form of child abuse. It is the shedding of innocent blood, a ‘sin that cries to heaven.’ Thus it is almost impossible to comprehend how a person who has spent years aiding and abetting the abortion industry is qualified to advise others and evaluate them on their adherence to guidelines surrounding child protection.

The woman in question is very different from one who procured an abortion at some point in her past, experienced sincere regret and now lives with the aftermath uniting her sufferings to the Cross of Christ. Instead, this woman has worked in high ranking positions at multiple pro-abortion NGOs as well as with what is arguably the largest abortion provider in the world. These positions made her responsible for influencing many, many women to use abortifacient contraception or to abort their children. The fact that her influence is continuing long after her employment there ceased, should of itself, disqualify her from any employment in the Archdiocese, but especially in the area of child protection.

The third question, (and it must be stressed, there are many more) is to ask what will be the practical consequences of employing an abortion advocate to audit parishes in order to gauge their level of safeguarding. As can be imagined, there could be many  occasions when Ms Hoban’s opinion would substantially deviate from that of the Church.

For example, if a young girl or her mother was to confide to a priest or parish worker that the girl was pregnant as a result of rape, then the usual advice would be that she should proceed with the pregnancy, and be given all the support she needed to do that. However, Ms Hoban, in her role as auditor, could decide that the priest or worker has not helped, but has rather harmed the pregnant girl by failing to counsel her to abort her child.

The likelihood of Ms Hoban or any other abortion ideologue remaining objective when faced with a thoroughly pro-life parish worker is slim to none. We live in times when merely raising a child in the Faith is seen as ‘abuse’ in some quarters. Failing to assist with an abortion, with homosexual affirmation or even with gender reassignment, as well as simply ‘offending’ by offering a different point of view are all commonly accepted forms of ‘abuse.’ In a climate such as this, there is great harm in employing ideologically-driven Catholics and non-Catholics, especially in governance roles.

When Pius X compelled his priests to swear the Oath Against Modernism more than a hundred years ago, he was not being pedantic or rigid. The saintly pontiff merely wanted men to publicly affirm their credentials because they would be representing the Church and would be responsible for hundreds, if not thousands, of souls. By making a public proclamation of their orthodoxy, those men showed their allegiance to the realities of the Church and not to some erroneous idea of the Church that they may have concocted along the way.

Such a public allegiance to the truths of the Faith would be a welcome addition to our Archdioceses in this present moment of crisis. For it would appear that many Catholic employees have no idea of what the ‘Catholic ethos’ implies, or else are aware and reject it without censure. Much is made of the governments’ ‘inherent requirement test’ for positions in Catholic schools, but the Church Herself also requires adherence to the tenets of the Faith as an ‘inherent requirement’ for positions in the Archdiocesan machinery.

When Archbishop Comensoli encouraged Catholics to support the Federal Religious Discrimination Bill, saying that ‘there is a need to provide people of faith with protection under the law,’[8] did it not occur to him that faithful Catholics expect that they will be protected from having personnel with anti-Catholic views in governance positions in the Church? Employing such a person violates his own Code of Conduct as well as undermines the efforts of those Catholics and non-Catholics who make combatting abortion their life’s work.

Archbishop Comensoli would do well to look at the fruits of his decisions and to ask himself whether many of the problems currently being experienced in the Archdiocese are inherited from former administrators, or are instead due to failed approaches by the current one. Finally, is the Archdiocese of Melbourne in fact ‘pro-life’, as it claims to be, or is that merely a pious Catholic thought which has no real-life application?

Send your respectful comments to: archbishop@cam.org.au