It seems that lately, every day brings some new threat, fear or grief, whether from within the Church or our civil leaders who are working in lockstep with the globalists. More mundanely, the media encourages emotional responses with its relentless fear-mongering and scandalous misrepresentations.

Fortunately, we Catholics have Scripture, prayer and the timeless teaching of the Magisterium to rely on, in trying to make sense of the confusion and chaos that surrounds us. We know that, although we may not be able to change what is happening, we are able to build up culture by focusing on our own families, an institution ordained by God to be the anchoring “principal and foundation of domestic society.”[1]

In trying to live out this process of becoming evermore holy and toiling to build up our respective domestic churches, the incongruences of the outside world are drawn into sharper focus. One such that has been emerging over the past few months is the reaction of non-Catholics and non-Christians to one particularly horrific side-effect of COVID vaccines – the vast numbers of spontaneous miscarriages and stillbirths. Reports of these tragic adverse reactions are growing by the week, with some suggesting that as many as 82%[2] of babies are lost when pregnant women receive an experimental mRNA vaccine.

Although the majority of sexually active Western men and women clamour for contraception and abortion, using harmful chemicals to stay child-free, the loss of a child still registers as tragic when it does not come about through their own choices.

How different the situation presents itself when couples arrogantly choose to limit their families, even broadcasting their decision to anyone who will listen. The Duke and Duchess of Windsor became poster-children for the nuclear family after Prince Harry’s interview with the evolution-touting Jane Goodall in 2019[3]. The couple was even awarded a prize from the UK-based Population Matters[4] on World Population Day for their decision to limit their family to only two children. Population Matters has, for three decades, pushed the false narrative that the world is overpopulated and that it can only be saved by women deciding to limit their families to two, one or even zero babies. And how is this feat to be achieved? By the use of artificial contraceptives of course – with abortion as a backup option in case a pesky child manages to beat the odds and come into existence.

Contraception is the centrepiece of the environmentalist movement’s strategy to reduce the population. The Population Matters website is full of references to contraception, from quizzes and articles to fear-inducing graphics like the one below. Despite the work of population realists such as Steve Mosher at PRI[5] and mainstream exposés of the effect of population control on demographics, interest in the overpopulation narrative remains strong. 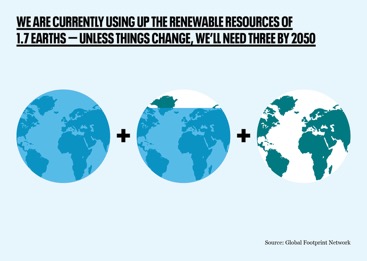 This brings me to the incident that is at the heart of this article: pro-life spokesmen who promote birth control and undermine the good work of the entire pro-life community. Case in point: Kristan Hawkins, founder of Students for Life of America, who recently posted the following to social media: 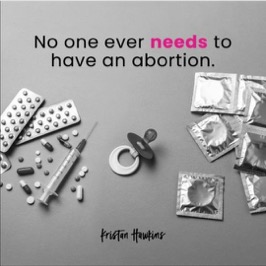 The message is quite clear: sexually active people have a choice – either to contracept or to accept a child. It’s hardly a pro-life, pro-family message. It certainly does nothing to promote the ideal of the family as the bedrock of society. And it is definitely gravely immoral coming, as it does, from a Roman Catholic.

Hawkins converted[6] from Protestantism in 2016, when she found that the Church’s teaching on the value of suffering helped her cope with her children’s chronic illnesses. She has even been featured in mainstream American media[7], urging the USCCB to deny Communion to President Biden. Hawkins claims that the bishops’ failure in this matter sends “mixed messages” about the Church’s stance on abortion. Surely the same can be said about a pro-life Catholic who works to end abortion but believes this can somehow be achieved by the use of contraceptives.

There is little difference between the two, except in chronology: one rejects children before conception, the other rejects children afterwards. In the case of abortifacient birth control, this can happen at either time.

As Pope Pius XI reminds us,[8] the prohibition on use of contraceptives is not a rule concocted by the Church but it is a “shameful and intrinsically vicious” sin against nature. Paul VI reiterated this in 1968, adding that the use of contraception would lead to immorality, adultery and the objectification of women. Pope John Paul II again reaffirmed this teaching in Evangelium Vitae, when he wrote that “despite their differences of nature and moral gravity, contraception and abortion are often closely connected, as fruits of the same tree.”[9]

Supporters of FLI are no doubt fully aware of the papal directives on contraception, and of the link between contraception and abortion. How is it that someone of Kristan Hawkins’ stature does not know this or perhaps believes that she knows better than the Church? Pius XI was familiar with the mindset of those seeking to compromise with the world and saw it as a collusion with evil:

“Not all the sponsors of these new doctrines are carried to the extremes of unbridled lust; there are those who, striving as it were to ride a middle course, believe nevertheless that something should be conceded in our times as regards certain precepts of the divine and natural law. But these likewise, more or less wittingly, are emissaries of the great enemy who is ever seeking to sow cockle among the wheat.”[10]

Even without infallible papal decrees, evidence of the connection is obvious. Hawkins seems to have forgotten the history of those two abortion behemoths: Planned Parenthood and Marie Stopes International. Both organisations, as even novice pro lifers well know, began with a mandate to energetically promote contraception. The relationship of both founders, Margaret Sanger and Marie Stopes, with the evil scourge of eugenics is also well-documented.

It is incomprehensible that a pro-life activist, who is so well educated in anti-abortion apologetics, can fail to acknowledge that contraception leads to abortion. It will not help stabilise society to promote sterile marriages or random hookups. Joining one’s voice to the chorus that rejects children will not bring hope nor harmony in these desperate times. The dismal world that rewards selfishness and makes “choice” its god needs, more than ever, to hear the Catholic teaching on love, marriage and children taught in its entirety.