Between the 24th of June and the 6th of July, I had the fantastic opportunity to join a group of young Australians for a retreat in New York run by Monsignor Reilly. I and two other young people from Perth were invited to attend following Perth’s debut 40 Days for Life Campaign. We joined a group of approximately 30 from the eastern states. For me, the retreat was a step into the unknown. My only public involvement with the pro-life movement had been in the 40 Days for Life Campaign so I had little knowledge of pro-life groups in Perth or in Australia. Consequently I had never heard of Family Life International, the group which organised the retreat. I had not even heard of Monsignor Reilly. As I had exams leading up until my departure my only knowledge of these groups had been from a quick web search to assure me that I was in good hands. Thus I had very little idea of what I was in for when we touched down at John F. Kennedy airport on Friday the 24th of June.

Now that I can look back, I am convinced that the highest expectations would not be disappointed after a retreat led by Monsignor Reilly. In my situation where I approached the retreat with little prior knowledge of Monsignor Reilly and thus no expectations, I was absolutely blown away by what I experienced. With more than 5 hours of talks scheduled each day in addition to the spiritual aspects of the retreat, the schedule was demanding. However, the depth of Monsignor Reilly’s knowledge and his ability as a presenter secured his audience from the moment he began speaking. 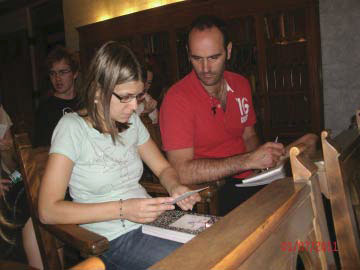 In the talks at the Retreat Centre

The first couple of days were dedicated to the history of the establishment of the Culture of Death in America and around the world. Here the Monsignor was often relating history that he had personally seen played out in his 44 years of active involvement in the pro-life movement. Starting with the philosophical roots of the establishment, Monsignor Reilly took us through to the current day where organisations including Planned Parenthood International and the United Nation’s Population Fund foist contraceptives and abortion on the developing world. This section of the retreat was somewhat depressing but the Monsignor never neglected to mention the Catholic Church’s wise response to every change in the culture. Monsignor Reilly focused on the Church’s response in the final two days of the retreat. This response is contained specifically in three Church documents, Humanae Vitae by Pope Paul VI, Donum Vitae by the then Cardinal Ratzinger and Evangelium Vitae by Pope John Paul II.

An additional benefit for attending the retreat was the sense of hope Monsignor Reilly and the whole group brought to my time in New York. It has been very tempting to sink into despair as a pro-lifer in the current climate. Studying at a secular university you are forced to defend your pro-life beliefs almost every time the topic comes up. Added to this is the often lack of visible ‘success’ whilst praying outside the abortion mill where most women ignore you. Monsignor Reilly was more than enough to revitalise my efforts. At 77 years of age the Monsignor has seen the full span of the defeat of the culture of life and yet he radiates energy and hope. Furthermore, spending time with other young pro-lifers helped to break down the sense of isolation I have felt between other people of my age on this issue. 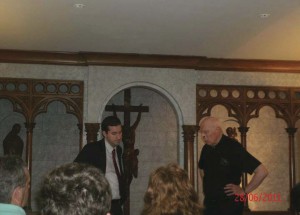 A Guest Speaker with Monsignor Reilly

One of the great advantages of this retreat was the contacts I have been able to make within my own city and across Australia. One of the practical actions pro-lifers in Australia should be doing is organising, getting to know one another and thus encouraging and motivating each other. From this point of view alone my time in New York was more than worthwhile.

Thanks must be extended to Monsignor Reilly for his inspiration and knowledge which ultimately made the retreat. Family Life international and Paul Hanrahan also deserve applause and thanks for the undoubtedly difficult task of organising the retreat and looking after the group in New York. Finally, without Perth’s Pregnancy Assistance organising the sponsorship, I would have been unable to attend what has undeniably been a life-changing experience.