The retreat to New York is now a memory but is certainly not something that will be forgotten by me or any of those who attended. It would be fair to say that it lived up to my highest expectations and having stayed with Monsignor Reilly at the Precious Blood Monastery previously and having spent a good deal of time with him over the last 16 years, my expectations were very high!

When we arrived in New York late on Friday night the 24th June (it was around midnight by the time all had cleared security and baggage claims) we were greeted by 8 New Yorkers including Monsignor Reilly at John F Kennedy airport with a “Welcome Australian Helpers” sign. They were there to ferry all of us back to the Precious Blood Monastery. This was a first sign of the warm and wonderful way we were received and treated by the Helpers in New York during our stay of 12 days.

We were all up at 6.00am the next morning to get to the beautiful church at the nearby parish of St Michael’s for 7:30 am Mass celebrated by the Bishop of Brooklyn, Nicholas Di Marzio, followed by a procession with police escort to the abortion mill. Most of us had less than 4 hours sleep and that following a 20+ hour journey from Sydney to New York. The start of our stay was to set the tone for the rest of our time which was intensely busy and at the same time exciting and inspiring. 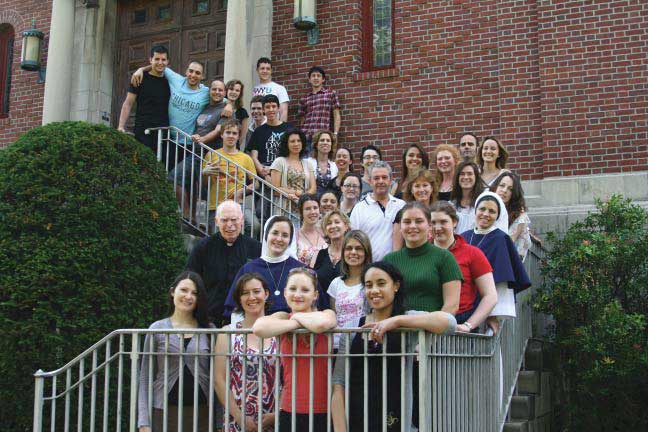 The retreat itself was an extremely inspiring and uplifting event, even for an old campaigner like myself, who has spent plenty of time on the “front lines”. The effect it had on our young troops was clearly evident and the admiration and respect they all had for Monsignor Reilly grew day by day. Their renewed commitment to the Gospel of Life was made manifest by their attendance during free times at the regular daily prayer vigils in Brooklyn with their new -found American family members.

Ask any of our young attendees what the highlight of their trip to New York was and I’m sure they will tell you the retreat itself. That’s not to say of course that they didn’t enjoy the rest of the trip. In fact I know they all had a wonderful time and the experience will stay with them all for life. It was in fact a source of great pride to me when speaking to Monsignor after our arrival back home that he thinks this group of young men and women will be a great influence on the direction of the battle between the culture of life and the culture of death. He said they will bring great graces on our country and was in fact the best group he has had at the monastery by a long way. High praise indeed!

The Bishop of Brooklyn and Mons. Reilly celebrating Mass.

Monsignor Reilly’s response to an invitation to visit Australia next January is a reflection of his regard for the group and is worth sharing:

“I am still pondering your invitation to Australia in Jan 2012. What makes the invitation so attractive is, as you know, that I recently experienced here at the Precious Blood Monastery the many talented, mature, well-balanced young men and women you brought here from Australia for the Helpers Pro-Life Retreat. They impressed all that met them. Indeed they did Australia proud! You are blest to have them working with you in Australia in the struggle of establishing a Culture of Life. To meet them again for me would be a joy and to try to continue to inspire them and other young Australian men and women is indeed an attractive challenge.”

I can’t thank you, our wonderful and dedicated supporters enough. This would not have happened if it wasn’t for your boundless generosity and I am also sure that you all will receive great graces from the limitless generosity of the Lord of Life. You are always in our prayers and we know that the future is pro-life with such dedicated and generous supporters and with a new generation of well-educated and committed pro-life activists.

Your support is again sought to continue the campaign to turn this once great nation back to God and his commands to love Him and to love each other. The culture wars are in full swing with the promotion around Australia of euthanasia and so called “gay marriage”. We need a pro-life organisation that takes the fullness of the Gospel of Life seriously. That can only be followed by adhering to the teaching of the Bride of Christ, the One, Holy, Catholic, and Apostolic Church. Family Life International is such an organisation.

The free gift for donations over $80 for this edition of Life Lines is the compendium of Monsignor Reilly’s talks used by him as a guide during the four days of our retreat. All those who attended found this little book of inestimable worth. If you can forgive the editors of this book for the grammatical and punctuation errors and focus on the content of his talks you will be richly rewarded.