Monica Smit, the founder of Reignite Democracy Australia, spent 22 days behind bars for the “crime” of trying to defend our nation’s freedoms[1]: freedoms that have been eroded by state governments intent on wielding power over a frightened and confused populace.

Initially charged with the crime of “incitement”, Monica refused to accept the onerous bail conditions that were demanded of her by the courts and chose to remain in custody. Since being released from prison, Monica has continued her work with renewed energy in an effort to inspire all of us to protect our human rights. She kindly agreed to do an email interview for Family Life International:

For those who may not know the details, could you explain why you chose to be incarcerated rather than accept your bail conditions?

The first condition was a curfew to be imposed from 7pm – 6am. That alone was enough for me to not sign as I didn’t want to be a prisoner in my own home seven nights a week.

Secondly, there were two bail conditions that have never before been seen in Australia: I was not allowed to ‘incite opposition to the Chief Health Officer’s directions on COVID restrictions.’ That means I could not even voice my concerns or disagree with the CHO directions. If a bail condition like that was agreed upon in a courtroom it would have set a very dangerous precedent enabling the criminalisation of opinions.

I was also being asked to delete all past content from the RDA website that opposed the CHO directions. If I had signed those bail conditions, my entire organisation would have become obsolete, including the newly formed political party of which I am Vice President.

A political party’s job is to oppose the current government: how would it be possible to perform that role if we are not allowed to voice our concerns about their actions?

I also had to think of the RDA staff of seven; there was no way I was going to sign away their livelihoods.

Was the perceived threat to our democracy, had you complied, really serious enough to warrant 22 days in isolation?

I absolutely believe the threat is serious enough for that. I would die for this cause in a heartbeat and am completely at peace with my decision.

The effect it has had on the Freedom movement in this country was worth every second I was in jail. It showed people how far the government and authorities are willing to go to silence opposition. If I had let them silence me then, then who would be next?

Have Australians been too complacent in the face of threats to our freedoms?

We have definitely been too complacent.

We’ve all noticed things encroaching on our freedoms over the last few decades, but we didn’t react because we thought it would be someone else’s problem or perhaps that the next generation would have to deal with it. Now, it’s happening to us in front of our eyes.

It’s not our fault this is happening, but it’s our responsibility to do something about it.

What part does your faith play in your work and how important was this aspect when you were in prison?

I have been praying for purpose in my life for several years. I had a feeling God had some sort of mission for me but I didn’t know what it would look like. I spent over five years searching for the path He wanted me to take…and then it just happened.

It didn’t happen overnight, it wasn’t one lucky video or article, it was years and years of searching and self-development. I honestly did give myself to God and asked Him to show me the way…which He did.

My work is not specifically religious-based but I never hide the fact that I’m a practising Catholic. I’m always open about my faith being the source of my strength and of the determination I had to keep searching for my purpose.

In prison, having God on my side gave me so much peace. He gave me complete peace while I was in there. I didn’t question my decision once because I knew that I was in God’s hands.

I prayed to him over and over…’please don’t let this be in vain…let this mean something.’ Well, He delivered on that prayer!

Monica, you still have to face charges of incitement next month: what are the implications of a guilty verdict?

My alleged crime is inciting others to commit offences that are only punishable by a monetary fine, which is similar to telling your friend to park in a No Parking zone. The police are trying to criminalise fineable offences like mine using a legal loophole, so we will be fighting this as hard as we can so we can set a precedent to protect others who find themselves in the same situation.

This tactic is silencing opposition all over this country; people are scared to organise anything because of these ‘incitement’ charges. If I’m found guilty, I will have a criminal record, but we will appeal and appeal until we win.

Monica, the scenes of violence we have witnessed over the past week from both sides have been very distressing. Do you have any advice for Australians, particularly Victorians, who may be tempted to resort to violence in order to make their voice heard?

I would never advocate for violence, whether it’s from the protesters or the police. In saying that, human nature dictates that one must defend oneself so it’s a very sticky situation. It’s not healthy for either ‘side’.

I’m very concerned about it, and would love to be able to influence peaceful negotiation. I’ve already been trying to facilitate this here in Melbourne as I think negotiation is the only answer but the government and police are refusing to negotiate.

It’s not too late to mend the relationship between the people and the police…but something needs to change and quickly! 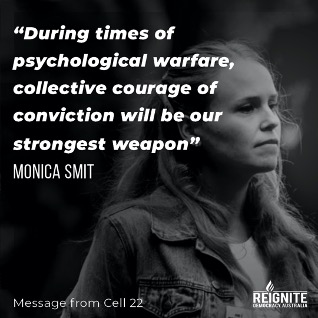 Do you have some encouragement for those who are feeling powerless at the moment in the face of vaccine mandates, endless lockdowns and of what amounts to a militarised police force?

Yes, hold the line! Your morals are not up for sale: no matter how painful it is, you must uphold your ethics at any cost.

You will never regret standing up for what you believe in. That feeling of peace when you stand up for yourself is absolutely priceless. Once you find your inner strength, you’ll never look back, you’ll be happier and more fulfilled. Try it!

Do you have one takeaway for Australians from your experiences?

I wrote this while I was in prison. Although it’s not as relatable now, I still wanted to share it with you:

The first thing I want to say is that everyone’s support somehow makes its way into my 3.5 x 3m cell. Knowing you’re all out there keeping the flame of democracy alive gives me strength and peace.

I have thought a lot about our ancestors who were thrown into concrete rooms, tortured and even killed for what they stood for.

Our fight for freedom is child’s play compared to theirs. You and I know we’re in a bloodless war, called psychological warfare. Our sacrifice might not be of the flesh, but more so of the mind. The way we will win is by keeping our minds strong, hopeful and positive. If we let them crush our soul or make us feel defeated, we’ll surely fail. Our number one weapon is courage of conviction – never forget that.

I don’t want sympathy or praise; all I want is to somehow inspire others to reach inside and find their inner strength and conviction. Don’t compare your strength to others, remember we’re all unique with different abilities, characters and most importantly, different states-in-life.

Deep down, we all know what we’re capable of; all I ask is for you to explore that.

According to your lifestyle, profession, and character…find a little more strength. Maybe tell your neighbour what you really think or stand up to your boss…learn to say no.

Maybe you’re in a position of influence and need a nudge to speak up…maybe this is that nudge?

I wasn’t always like this. I had to find my strength the same way I’m asking you to do. Once you start, you’ll never look back. It’s truly empowering to learn what you’re capable of. I can almost guarantee you’ll be happier and more fulfilled than you’ve ever been.

I don’t want to live the rest of my life in a country like this…do you?

I’ll leave on this final quote: If not now, when? If not you, who?