A State in Slavery to Atheism

Consider the realities in the Australian State of New South Wales.  Every day its peoples enjoy the gifts of God—what they are (their essence as men; not monkeys or donkeys) and that they are (existence)—the world in all its beauty, majesty and order, their very life and breath.  Everything they have at every moment is given them.  They take this multitude of daily gifts and ignore the giver, Almighty God, and their utter dependence on Him.  Worse, they mock God to His face by their conduct.

They fornicate and give themselves excuses for doing so; they prevent the right ordering of their bodies to suppress the natural end of copulation; they indulge in unnatural sexual unions; they murder the innocent unborn when contraception fails; they reject the duty to respect the marriage bond of their neighbours; they promote euthanasia and offer respect, instead of abhorrence, to the suicide; they steal; they lie; and to cap it all, they reject the rights of God over them as their Creator and reject the end for which He brought them into existence.

Christmas approaches and one looks in vain for representations of the Crib, the Holy Family.  The reason for the season is abandoned in favour of christmas kitsch, cherry nosed ‘santas’, reindeers, holly and flashing lights, and all the rest of the trivia.  The holy day is degraded to a holiday, a time of universal rejoicing over the beginning of man‘s salvation reduced to a worldly celebration of self-indulgence.  The formal is swamped in the material.

New South Wales is consumed by a drought that is fast depleting feed for stock and water for subsistence and the natural produce upon which its peoples depend.  It is plagued by bushfires on a scale unprecedented since records have been kept. Sydney’s immense water supply is under threat.  Calls go out to pray for rain and relief from the conditions yet the majority of its citizens will not abandon their hatred for God or their rejection of the moral order He established in their midst.

In April 1953 some three quarters of a million people lined Bridge and Macquarie Streets in Sydney as 25,000 marched in honour of our God and Saviour Jesus Christ present in the Blessed Sacrament to mark the end of the seven day Australian National Eucharistic Congress.  Each year since June 1978, and with growing momentum, Sydney has hosted a festival in support of homosexual behaviour which now extends over three weeks and culminates in a parade through Sydney’s streets of sodomites and lesbians ‘celebrating’ their perverted lifestyles.  The Devil is having his revenge.

In October 2019 the NSW State legislature passed ‘legislation’ permitting a woman to abort her unborn child, the Abortion Law Reform Act.  Pro-life forces had laboured to prevent such legislation for almost fifty years only to be betrayed by a Liberal government, one allegedly supportive of human rights.  That such ‘legislation’ could be passed by representatives of a civilized society, eo ipso destructive as it is of society’s very elements, is an utter disgrace, an act of betrayal of their fellow men.

When the prophet Jonah told the citizens of Nineveh to repent lest they be destroyed for their sins they did so from the king to the very lowest in the city, humbling themselves to the dust and fasting from food and drink.  They forsook their sinful ways in the hope that God would relent and pardon them; that He would forsake his avenging anger and spare them.  But, blind to the true causes of the disasters that beset them, the members of our Australian society look to solutions that ignore their own immoral behaviour in favour of an alleged collective misbehaviour involving the earth and its resources.  Yesterday some 20,000 people marched through Sydney streets to call for greater efforts to combat ‘climate change’.  They do not understand that the fault for the natural disasters that beset them lies with themselves and their own immoral conduct.  Why should Almighty God relieve their distress in natural matters when they systematically reject the natural order he has implanted in them? 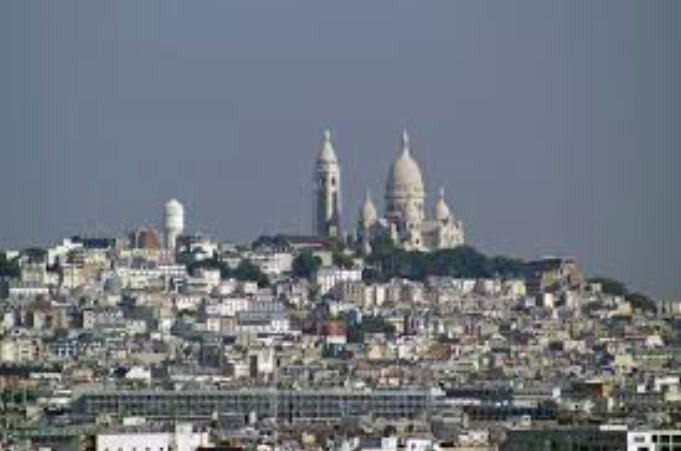 Basilica of Sacre Coeur, Paris, site of the martyrdom of St Denis

Much is made about the need in society for ‘religious freedom’ (which is but a category of absolute freedom).  The debate is an empty one.  We have had ‘religious freedom’ in Australia for 100 years and more.  People can choose any religion and they will not be prevented from doing so.  They are not constrained, as they ought to be, to choose the religion—and only that religion—that God founded on earth, whose essence and provenance as such is readily discoverable by one who, free from prejudice, will make the effort.

We have had ‘religious freedom’ for 100 years and more.  The problem is not ‘religious freedom’ but that the followers of the dominant religion are imposing their views over those of the subservient religions.  This dominant religion is atheism[1], belief in ‘no-God’, an essential element of whose tenets it is that the religions of others, such as those who believe in God, must be suppressed.  The atheist is yoked to his belief system quite as firmly as is the believer in God.  It is a corollary of the atheistic dominance in religion that the ideas and moral values that go with these other religions must also be suppressed, moral values such as:

The corruption of the moral lives of the members of New South Wales society reinforced by such ‘legislation’ is an inevitable effect of the dominance of this belief system, a system as irrational as it is evil.

The atheist agenda demands the incorporation successively (through acceptance, legislative endorsement then compulsion) of five elements, each of them destructive of the individual and of society—

Each of these elements, save euthanasia, has reached the stage of legislative endorsement in New South Wales.  There remains only the attempt to compel the populace for the atheistic agenda to reach its fulfilment.

In all this, of course, the condition (removens prohibens) for the popular embrace of atheism has been the failure to speak and to act by those whose duty it is to speak up for God and His rights in men’s lives, the weak and incompetent bishops of the Catholic Church.  Rendered effete by the ruminations and determinations of the Second Vatican Council fifty years ago and the abandonment of Catholic principle that Council precipitated among their own, they have offered, and they continue to offer, no resistance to the atheistic putsch.

In a speech on 4th September 1870 Bishop Felix Fournier of Nantes attributed the defeat of French troops during the Franco-Prussian War to divine punishment after ‘a century of moral decline’, the withdrawal by Napoleon III of the French military garrison protecting the Vatican and the uprising of the Paris Commune.  On May 24th following the Communards executed the Archbishop of Paris, Georges Darboy.  This speech of Bishop Fournier was to provide inspiration for the construction on the Mount of Martyrs in Paris (Montmartre) of the Basilica dedicated to the Sacred Heart of Jesus known as Sacré Coeur.  Persistence with the project and its continuance over 145 years has largely been due to the country’s Catholic contingent.  The Basilica and the ceremonies that ensure the Blessed Sacrament is exposed daily for adoration by the faithful remains a signal mark of the French nation’s repentance for its past sins as well as providing a bulwark against the flood of anarchy that threatens it.

There is a particular significance in France’s symbol of public repentance for the State of New South Wales.  The patron saint of Paris as of France is the bishop St Denis who, with companions, was beheaded on the Mount in or about 250 AD in the course of a Roman persecution.  While Sydney, the capital of New South Wales, was named by Governor Arthur Phillip for Thomas Townshend, First Viscount Sydney, his name is an English rendition of ‘St Denis’ which the French pronounce in a fashion hardly distinguishable from the English word.[2]  If our City can be said to have a patron saint it is the martyred bishop of Paris.

In this age of despair over the dominance of the atheistic spirit among the populace and the systematic failure of leadership of those sworn to lead the people in God’s ways, it is left to the remnant of faithful Catholics in the State, in emulation of the faithful of France, to work to intercede for its collapse.  But how can we achieve it?  We have no Sacré Coeur.

No basilica—but we have Christ Himself, the Sacré Coeur.  St John Vianney, the Curé d’Ars, used remark how the Devil hated fasting.  Anyone who has read his biography by the Abbé Trochu will appreciate how, through fasting, the Saint achieved the conversion of sinners throughout the course of his life.  There is a report that the Devil was overheard to say: “If there were three like you in the world my kingdom would be destroyed”.  A man known to the writer remarked how many years ago, possessed by the need to amend his sinful life, he embarked on a systematic fast over a period of five months only to find his progress marked by extraordinary phenomena.  He would enter a church for Mass to have the amplifying system emit the most appalling noises.  He thought the problem was peculiar to his local church until the phenomena were repeated when he attended Mass elsewhere.  The Devil hates fasting!

If the evils of the present dispensation in New South Wales are to be combated it seems to the writer that the State’s faithful Catholics—no matter how few they be in number—must devote at least one day each week to fasting for the intention of its collapse, and for the stirring to action of just one of the country’s Catholic bishops.

‘Think only this—that God ordains all; and where there is no love show love and you will find love’.

The physical evils that beset us in New South Wales have been ordained by Almighty God for our good.  Let us pray not for their ending but for their continuance as long as necessary that the resulting sufferings will move men to reject atheism’s moral degeneracy.

[1]  Contrary to its customary usage the word ‘religion’ is not tied to belief in God.  Its nominal meaning is ‘a tying or, more accurately, a yoking (of the one so bound) to some cause’.
[2]  Members of the French forces were wont to use St Denis! as a battle cry.