Just when we thought that the Christmas celebrations would provide a break from controversy, the Vatican disappointed yet again by honouring the Earth Mother at a Christmas concert.

The Vatican Christmas Concert was held on December 14 and gathered both Italian performers and international singers such as Bonnie Tyler and Lionel Richie. The two-hour show featured traditional Christmas hymns as well as modern pop-songs and was held in the Pope Paul VI hall, the Sala Nervi (yes – the one that is designed to look like a huge snake and is dominated by what is possibly the planet’s most grotesque figure of Jesus Christ.) Although the Pope wasn’t present at the concert, he gave a pre-recorded address which was broadcast during the evening.

“Mother earth reminds us of our origins”

Sandwiched between the sacred and profane music was a speech about the Amazon, made by a young indigenous woman. She instructed the concert-goers to cross their arms over their chests as she ruminated on pagan Mother-Earth, saying:

“First of all, I want to ask everyone to put your hands in this form there where you are.

You will feel a strong vibration: this is the heart. Your heart, but also the heart of the Mother Earth.

And in the other side where you feel the silence, there is the spirit – the spirit that allows us to understand the message of the Mother.

[Translation by Maria Cancel via Bree Dail on Twitter.]

Social media exploded with claims that this “Hicha Guaia” is synonymous with Pachamama, but so far, this has not been verified. Likewise, the suggestion that this little speech with arms crossed constitutes a formal pagan ritual is also questionable. However, ritual or not, the theme of the speech is clearly idolatrous and harkens back to the goings-on at the recent Amazon synod. In many ways, this incident is even worse, taking place as it did, during Advent, while the Christian world awaited the coming of the One, True God – He Who came to earth to free us from slavery to idols.

Strangely, the entire audience of 5000, including priests, prelates and performers, appeared to follow the young woman’s command and folded their hands over their chests. Even more strange was the fact that a Catholic priest introduced the girl and her translator.

The event was organised by the Congregation for Catholic Education, NGO Missioni Don Bosco Valdocco and the Scholas Occurrentes Pontifical Foundation, to raise money for a charity project called, “Let’s network for the Amazon”. This charity focuses on an area of the Brazilian Amazon which experiences great poverty, poor school attendance, violence, and murders – the Iauaretê district on the Colombian border.

As well as raising awareness and money for the Iauaretê, the concert was used to launch an educational program based on Pope Francis’ encyclical, Laudato Si. According to the website of the Vatican’s Global Compact on Education, the main goal of the program is to educate young people about reforestation of the Amazon. Readers will notice that this educational program is not Catholic in nature and contains no religious references – save for pagan ones. For example, the website includes this statement from Brazilian student, Hamangai Pataxo, to explain the relationship between indigenous Amazonians and their land:

“Our body is our territory; our belly is our temple; our veins are our rivers.” 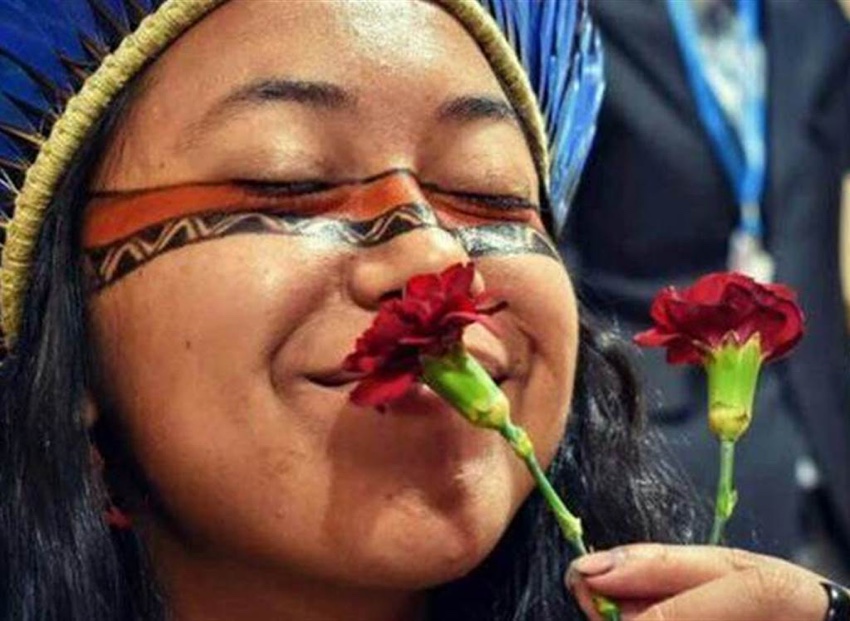 [Picture above from the Global Compact on Education website: note the black ring, which is a symbol of Liberation Theology.]

If faithful Catholics fear that environmentalism is being absorbed into our Faith in order to dilute and change it, then this statement will do nothing to allay those fears. There is nothing vaguely Catholic, or even Christian in this ideology. But educators from the Scholas Occurrentes add weight to these pagan ideas by stating that we need to learn from these indigenous peoples because they ‘have managed to preserve the diversity of nature and lifestyles, respecting its balance but also its role as a producer of wealth, limiting its exploitation to a minimum.’

In fact, despite being impoverished, ignorant, violent, murderous citizens for whom the Vatican is raising money, these Amazonian peoples are being held up as examples of virtue to our young people. Through listening to them (and by planting trees) students will learn to heal the supposedly fractured relationship between humanity and the Biosphere.

The Scholas educators have devised the programme according to educational principles laid down by Pope Francis, who has added pedagogy to his ever-growing list of specialised talents; climate science, global economics and clerical attire critic. The pope’s educational process is said to be based on the triad of ‘mind, heart and hands,’ as exemplified in Laudato Si.

“Our mind is connected to our moral conscience whereby we pursue, develop and apply knowledge; our heart is connected with Creation, our neighbours and the Transcendent dimension; our hands are connected to the need for practical action, which can connect human activity to its responsibilities.”

The Scholas already has a huge influence on children around the world: it hosts a social media platform which is used by 450,000 schools, reaching up to one million children, in order to promote a ‘culture of encounter.’

For those who have the inclination, a visit to the Scholas website will prove to be interesting, if not quite disturbing. Their educational philosophy is based in and expressed via the medium of ‘encounter’. One of the most concerning aspects of this movement, and also of the Global Pact on Education as a whole is the complete absence of any mention of Catholic formation or of the family as first educators. Indeed, the pope himself is quoted as saying,

“Everyone, but most of all children and young people, need an appropriate setting, a truly human habitat, with suitable conditions for their harmonious personal development and for their integration into the greater habitat of society. This it is imperative to create a strong and extensive ‘network’ of truly human bonds, which supports children, which opens them to life in a calm and confident manner, which is an authentic place for encounter, in which the true, the good and the beautiful may find a just balance.”

Whereas popes in the past designated the family as the ideal ‘habitat’ in which to raise children, Pope Francis apparently intends to usurp the role of parents through his many educational schemes. Not only that, but the Scholas project has connections with George Soros and produces materials with a distinctly pro-LGBTI flavour. [Click here to read an informative article on this by Maike Hickson.]

If this is a taste of what’s to come from the Global Compact on Education, then parents should be very concerned. It would appear that there are plans afoot to indoctrinate Catholic children – as well as those from other faiths – into a pantheistic environmentalism in which ‘encounter’ is the only doctrine. Those who should know better, the Roman hierarchy, are already well on the way to embracing such a move, if their behaviour at the Christmas Concert is any indication.