Although there are many reasons not to support the ALP at Victoria’s upcoming state election, there is none of more concern to parents than Labor’s horrific policy regarding “gender affirmation.” Of particular interest is the section on parental consent which makes it clear that this policy completely strips away the rights of parents to protect their children from making life-changing decisions which they do not fully comprehend. The following is taken from the Victorian Education Department website under the section on “LGBTIQ Student Support”:

Parental consent
There may be circumstances in which students wish or need to undertake gender transition without the consent of their parent/s (or carer/s), and/or without consulting medical practitioners.

If no agreement can be reached between the student and the parent/s regarding the student’s gender identity, or if the parent/s will not consent to the contents of a student support plan, it will be necessary for the school to consider whether the student is a mature minor.

If a student is considered a mature minor they can make decisions for themselves without parental consent and should be affirmed in their gender identity at school without a family representative/carer participating in formulating the school management plan.

Department policy addresses situations in which students, though under the age of 18 years, may be sufficiently mature to make their own decisions.”

One organisation which has been working tirelessly to expose the trans-agenda, particularly in Victorian schools, is Binary Australia. Binary spokeswoman, Kirralie Smith, was in Melbourne recently to draw the public’s attention to the Andrews’ government’s policies before November’s election.

Kirralie and her colleagues were able to promote their campaign in a highly visible way, with a huge banner mounted on the back of a truck. They also stood on the steps of Victoria’s Parliament for two days, as supporters came and went, holding signs and handing out fliers to passers-by. There was some interest from the media, with Avi Yemeni from Rebel News interviewing Kirralie. FLI spoke to Kirrallie about her work and how her campaign was received in Melbourne.

How aware are Victorian parents about the policies in the schools attended by their children?

“We did a phone survey of 2700 Victorians in 5 key seats. The level of awareness is low. Less than 30% of Victorians are aware that the education policy states school staff can transition students without their parents’ knowledge or consent. Once made aware, almost 90% were opposed to Dan Andrew’s policy.” 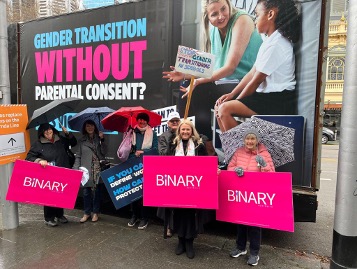 The Education Department guidelines say that medical practitioners don’t need to be consulted before a child transitions. What are some possible consequences of such an irresponsible policy?

“A child with any kind of gender confusion requires health care. Studies prove that the majority of children with gender issues are also either autistic, have experienced trauma or a mental health issue. School staff are not qualified to diagnose or treat such conditions. This “affirmation model” reinforces a lie to a child that they can change their sex. They can’t. All they can do is wear costumes, change their name or pronouns, and eventually go onto puberty blockers or go onto cross sex hormones. None of these superficial measures deal with the underlying issues. How can school staff be trusted if they engage in the promotion of a political ideology at the expense of a child’s health? Children deserve the best care and interventions to help them to accept reality, not deny it.” 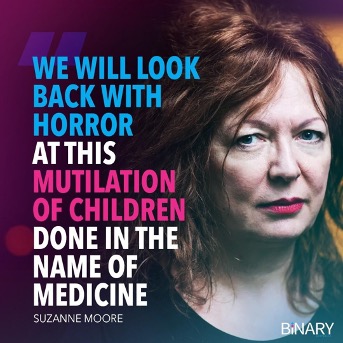 As you point out, this policy gives school teachers or counsellors the ability to declare a child to be a ‘mature minor’, whereas that right is usually reserved to the courts. How is the Andrews government legally able to transfer this right to teachers?

“The Andrew’s government has done this under the cover of other federal policies that have lowered the age of consent for health care under Medicare. Whether it is for vaccines, abortions or contraception, the government has sneaked in ways to undermine parental knowledge and consent. Under the guise of the mis-named “conversion therapy” laws, they have usurped parental rights entirely. So-called “affirmation” therapy is the true conversion therapy – convincing people to try and convert from one sex to another, which simply cannot be done. The policy is primarily concerned with name changes, pronouns and costumes but paves the way for schools to seek out medical practitioners if they deem the parents to be in opposition to their child’s gender identity.”

Some politicians were willing to speak to you while you were in Melbourne. Could you tell us about that? How knowledgeable are the non-ideologically driven politicians about this issue?

“We spoke to members of the Liberal Party, Democratic Labour Party, Liberal Democrats, Shooters, Farmers & Fishers and Independent Catherine Cummings. The new Freedom Party of Victoria also came down. Overall the response was very positive. The thing with parental knowledge and consent is that it is consistent across all ethnic groups, faith or belief systems. All cultures value parental rights so it is an issue that unites. Each representative we spoke to was in agreement that parental consent is paramount and this policy goes way too far. Most of the members had opposed the conversion therapy laws and were dismayed with the policy.”

During your recent awareness campaign in Melbourne, you showed us some pro-LGBTI picture books that school libraries are stocking. How pervasive is this ideology in the classrooms of younger children?

“It is not only pervasive, it is now compulsory. Schools must include this kind of content in their programs. There is some leeway in how it is applied but it has given activists in the system the green light to charge full speed ahead. From books in school libraries and being read in the classrooms, right through to several special days such as “Wear it Purple” day where the entire school is expected to get on board the trans trend. In many cases parents are simply not aware of what is going on at their children’s schools, even private and faith based schools.”

Schools around Australia have been quick to jump on board the so-called “social transitioning” bandwagon. It seems a simple matter to introduce some colourful posters and books, arrange for a new toilet to be installed, and generally join the hubris that gender activists have made popular through the mass media. While the rights of parents to control their children’s major decisions is of great concern, the rights of children to be taught and supported in the truth has also gone by the wayside.

In an article entitled, “A Childhood is Not Reversible” the psychologist author wrote that the apparent success of the first stage of a child’s transition journey, social transition is short-lived. “Social transition is a strategy with an expiry date,”, writes the author.

“ It’s a short-term strategy with long term consequences. It works so easily for young children – pre-puberty it truly is impossible to tell for many whether they are male or female. The young child who is transitioned is treated by everyone as the opposite sex, and because they are small, they believe that this is how things are. Everyone is happy and the social transition provides short term relief all round. Child is happy, parents are happy, we all celebrate. But in the long term, it creates a problem which is not reversible. Puberty is going to arrive, and the child who has been socially transitioned is put in an impossible situation. They’ve been told all their life they ARE a boy (and that anyone who says they aren’t is transphobic), but their body knows otherwise.”

When puberty, that time of reckoning, does arrive, it is not schools but parents who should be free to help their children navigate its changes and challenges. Daniel Andrews’ gender-affirmation model is another disaster to be heaped upon the damage already being inflicted on children by adults in the name of “inclusion”.