The Australia Day Life and Family national conference held in Albury NSW from 26th to 29th January this year provided a wonderful springboard for the development of many of our programmed goals for this year. This conference saw two of the world’s greatest defenders of the Gospel of Life, Monsignor Philip Reilly and Mr. Steve Mosher, in Australia together with thirteen of our best and most articulate defenders of life and family.
We are faced with attacks on the Christian foundations of Western civilization from many quarters both inside and outside Christian Churches. There are many who seek to interpret the holy words of scripture to suit their own ends and satisfy their own desires. St. Peter warned us against this in his second epistle. “First of all you must understand this, that no prophecy of Scripture is a matter of one’s own interpretation, because no prophecy ever came by the impulse of man, but men moved by the Holy Spirit spoke from God.” 2 Pet. 1:20-21. St Paul also spoke to this. “For the time is coming when people will not endure sound teaching, but having itching ears they will accumulate for themselves teachers to suit their own likings and will turn away from listening to the truth and wander into myths.” 2 Tim 4:3-4. 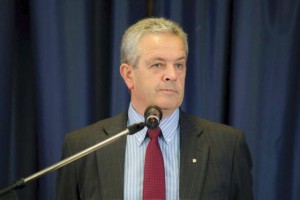 What then is the answer to these times? How should we as the people of God respond? Christ Himself showed us the way and He was followed by the Apostles and the Saints through the ages and it has been proclaimed by the Church from the beginning. “If any man would come after me, let him deny himself and take up his cross daily and follow me.” Luke 9:23. Christ’s way was the way of self denial and sacrificial love. The question for Christians today is how do we practise this? Jesus Christ is not the enemy of anyone though many have made themselves enemies of Christ. Jesus died for all and wants the salvation, through His Church, of all those who persecute Him.
We take the commission of Our Lord Jesus Christ seriously at Family Life International. We need to address all the attacks on life and family and we need to proclaim the fullness of the truth in doing so. How can we defeat these attacks, which at their heart are Satanic, if we don’t employ prayer and fasting? Only God will overcome the demonic powers behind such abuses and perversions as abortion, euthanasia, contraception and homosexual unions being touted as equal to the marriage covenant. All these things are attacks on marriage and the culmination of this evil agenda is the push for so-called “gay marriage.” 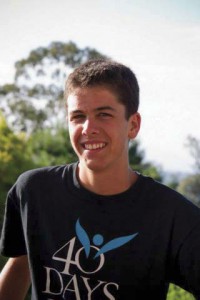 We believe however that until we end the scourge of abortion we won’t be successful in staving off these other evils that are now being promoted in the name of equality and justice. If we can stand by as a society while around 100,000 babies a year are mutilated and destroyed in their mothers’ wombs, how then can we defeat the push for the elimination of the sick and the elderly by euthanasia? Over the last 40 years about 4 million unborn children have been killed in Australia by surgical abortion (and an untold number by abortifacient contraceptives -possibly another 4 million?) and around 2 billion worldwide. How can we deny the homosexual lobby their so called “right” to a redefined secular “marriage” contract in the face of such great evil visited upon the most defenceless of our brothers and sisters?
One of the main apostolates we support is the Helpers of God’s Precious Infants. This worldwide campaign of providing a peaceful, prayerful presence at the “Achilles heal” of the abortion industry, the abortion mills themselves, is the answer to overcome this modern day holocaust, says Monsignor Philip Reilly, the Helpers founder and spiritual head. In Australia the Helpers can be found in all the major cities and some of the larger towns. Catholic Bishops and Priests and thousands of lay people are involved in this campaign of prayer and fasting.
The Helpers go with the mind of Christ to the modern day Calvary where we pray for the conversion of hearts and the salvation of souls. It is here that innocence is crucified and we remember the words of the Lord, “Truly I say to you, as you did it to one of the least of these my brethren you did it to me.” Matt. 25:40. So we go not to save the babies, though we want to see them saved, but to save the souls of the mums and dads and the abortionists and their staff. For Christ died for them on Calvary and wills them to be saved. This prayerful approach brings Love where there is no love and creates a new paradigm which the forces of evil do not understand and cannot overcome. 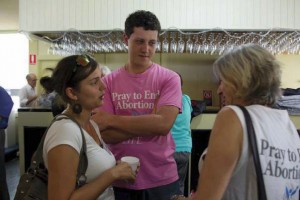 Because we go in love with Mary the Mother of Christ and the beloved disciple, John, and the other women to pray at the foot of the Cross, Christ Jesus, who raises all things and makes all things new, can work through Grace on the hearts of all those involved in this great evil. When a mother responds to our offers to help with a “yes”, she is saying yes to Love Himself and the baby will live also. Those who pass by are also affected by this witness of love and prayer and are often (over time) moved to support us and accept the unconditional love of God in their own lives.
The great campaign of 40 Days for Life directed in Sydney by Family Life International and which begins on Ash Wednesday, (22nd February) and runs each day for 24 hours through to Palm Sunday (1st April) is an extension of the prayerful approach of the Helpers. For 40 days we have a peaceful, prayerful presence at the Preterm abortuary at 1 Randle Street, Surry Hills from 6.00am to 8.00pm and then overnight in prayer at St. Peters Catholic Church in Devonshire Street, Surry Hills. This campaign, which is held in 422 cities around the world, has resulted in thousands of “turnarounds”, the conversion of abortionists and their staff and the closure of several abortion mills. We see it as an extension of the Helpers apostolate which is held 365 days each year.
We have many other projects and programs on our calendar for this year which can be reviewed on our website. www.fli.org.au

Yours in Christ Jesus Our Lord.
Paul Hanrahan.